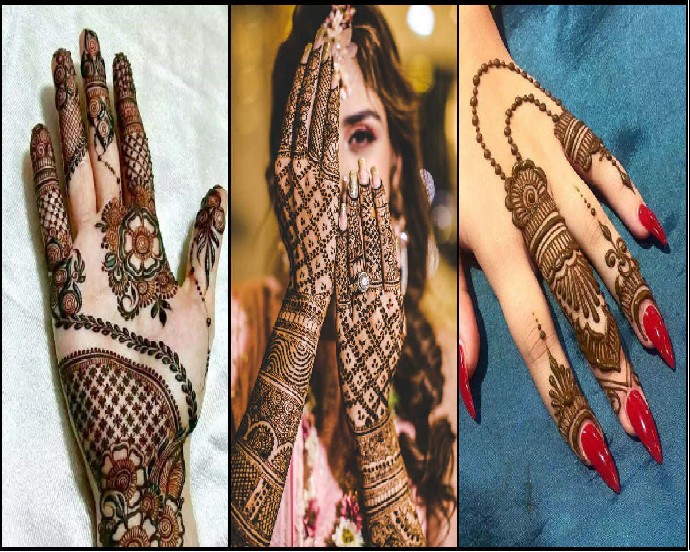 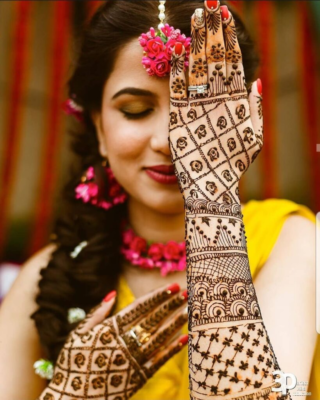 Numerous Bridal Mehndi Artists in India are featured in this article. Simply choose the one you enjoy the most. We hope you had as much fun reading this list as we did compiling it! People are completely smitten, and these Mehndi Artists are crushing it with their innovative and creative Mehndi designs.

This article is for you if you’re wondering, “Best Mehndi Artists for Bridal and all other Occasions!?”

In each category, you will find both budget-friendly and luxurious mehndi artists from which to choose your favorite.

Pramod Mehndi Art has 17 years of experience and offers the Best Mehndi Designs in India. Their specialty is bridal mehndi design. Their clientele includes numerous renowned clients from India and abroad, and their work has been published in leading newspapers and magazines. 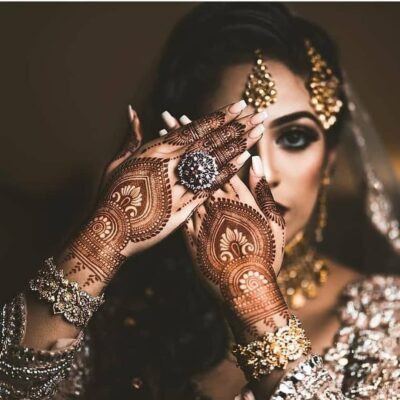 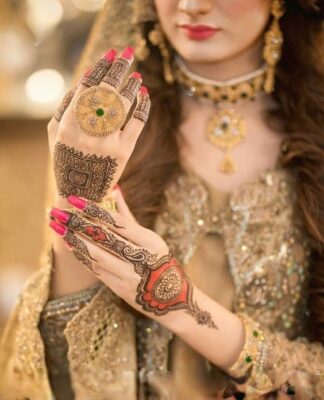 Namrata has come a long way since she began her career at the age of 17 and is now a successful, professional mehndi and henna artist. Her strength is her quickness with a strong finish. Her designs are stunning yet elegant, and she is well-known for her eye-catching Indo-Arabic, wedding, and bridal mehndi patterns. She also offers mehndi services at her home. 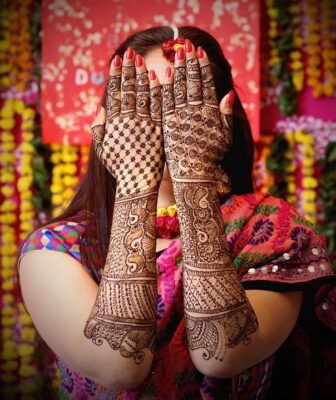 Falguni Rajpara is known for her ability to transform intricate and elaborate patterns into breathtaking works of art. She began her mehndi design career when she was 15 years old. She gives each client individual attention and is an expert in creating stunning fusion mehndi designs. 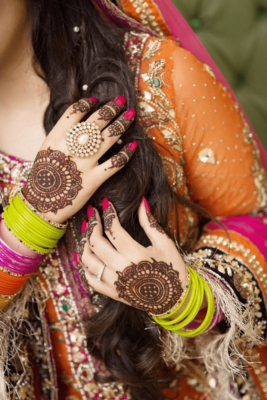 Saba Sheik is a skilled and experienced mehndi artist with over 8 years of experience in designing mehndi. She is well-known for her magnificent wedding, bridal, Indo-Arabic, and Dubai-style mehndi patterns. She also takes bulk orders for weddings and other special events. 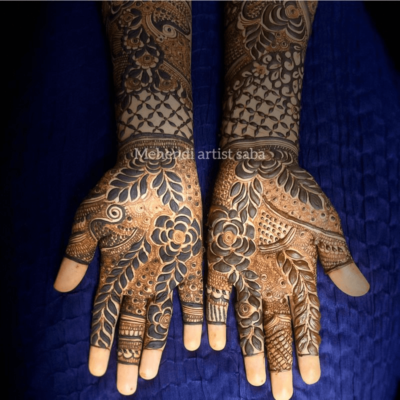 It doesn’t get any bigger than this. Veena Nagda is the queen of all mehndi artists and one of the world’s leading mehndi designers. Her clients include industrialists such as the Ambanis, Hindujas, Tatas, and Birlas. She has also done mehndi on the majority of the famous Bollywood stars, from the Bachchans to the Kapoors. Veena Nagda has taught professional mehndi to over 50,000 students to date. 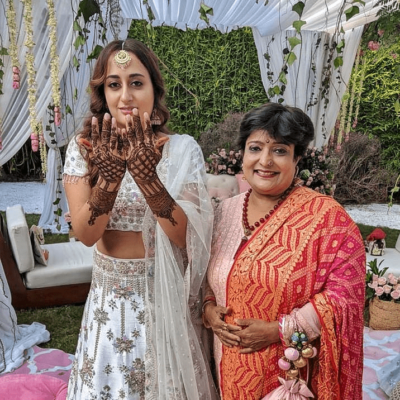 She used to practise her mehndi design skills on her close friends and relatives when she was only 15 years old. That’s awesome! She is well-known for her beautiful designs such as Arabic Mehndi, Artistic Mehndi, Black Mehndi, Bridal Mehndi, and so on. TV stars and Bollywood celebrities are among her clients. Nipa manages her company professionally. 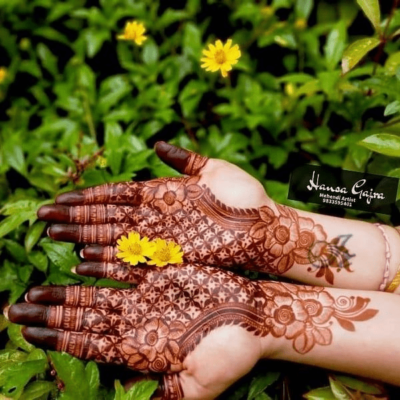 Sheetal Tankaria, owner of Khushi Mehndi Designer, creates one-of-a-kind mehndi designs. Her designs are appealing and lovely, and she specializes in Bridal Mehndi, Indian Mehndi, Arabic Mehndi, Dubai Mehndi, and Rose Mehndi. She also teaches classes for those who want to improve their mehndi design skills. 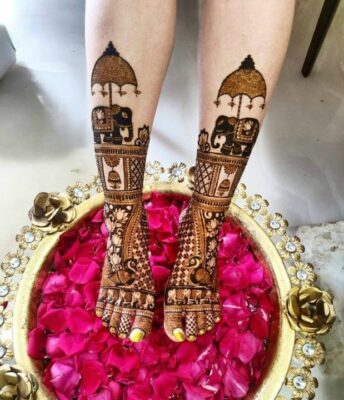 Anish Bridal Mehndi Artist ranks first among the Best Mehndi Artists in Chandigarh. They have been working in this field for over three years. Anish bridal mehndi artist is well-known for his beautiful Henna designs. 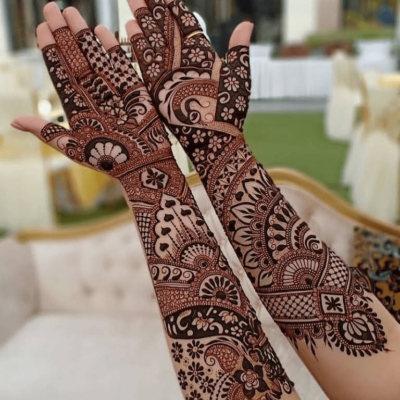 With the best designs, excellent finishing, and a collection of self-created designs, this artist is leading the business. Various VIPs and celebrities enjoy using their services to make their events more joyful and exciting. They come up with innovative designs that will energise you for the occasion.

Sharma Mehndi Art is another name for the best mehndi artist, Anish Sharma. They have been at the helm of the industry for the past 28 years. They are among Chandigarh’s best artists. This is a one-stop shop for all of your festive and grand events like Karwachoth, Diwali, Raksha Bandhan, Vaisakhi, marriage ceremony, sangeet party, baby shower, birthday party, school or corporate event. Their main goal is to make your events fun and enjoyable. 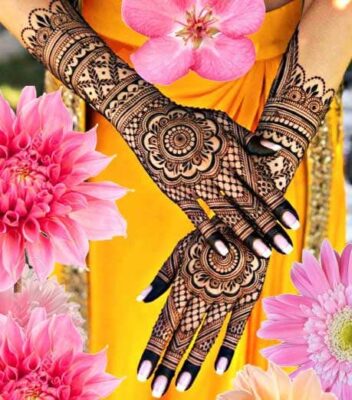 Sharma Mehndi Designers offers a wide range of mehndi designs and patterns. Every customer praises and loves their ideal and unique designs.

Mahek Mehndi Art’s expert, dedicated, and trustworthy team adds a stunning look to your bridal outfit by completing it with a fabulous bridal henna design. They are experts at combining contemporary and traditional designs to create something truly unique for your special day. 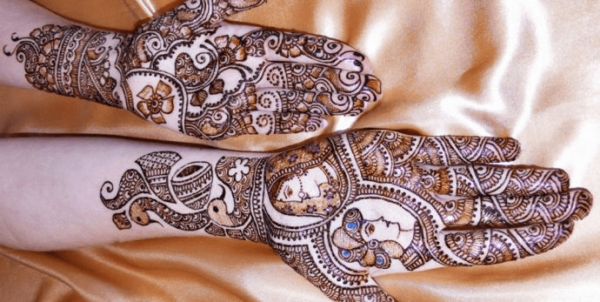 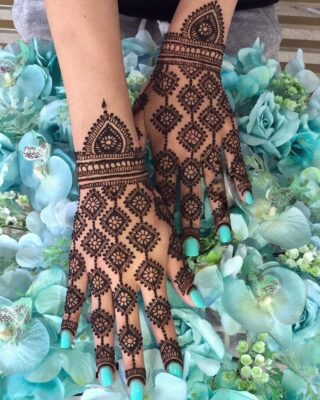 Jasmine Mehndi is another well-known Mumbai mehndi artist. Her work is known for being neat, unique, and extremely creative. Many of her clients have praised her over the last 12 years. Her specialties include bridal mehndi, figures, Rose mehndi, and glitter mehndi. 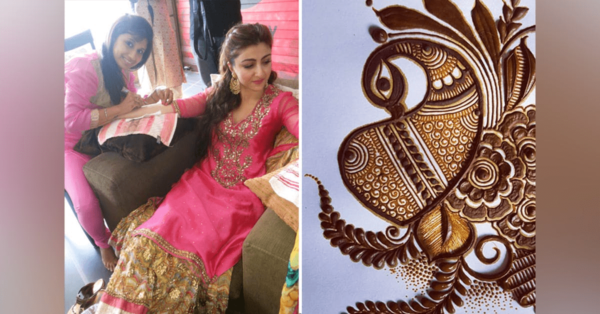 Deepa’s Mehndi, a nearly 75-year-old art house, has become a well-known name in the mehndi industry. They are well-known among Bollywood celebrities and other high-profile individuals. They cater to weddings and other events in India and around the world. Their distinct designs have won the client’s approval over the years. 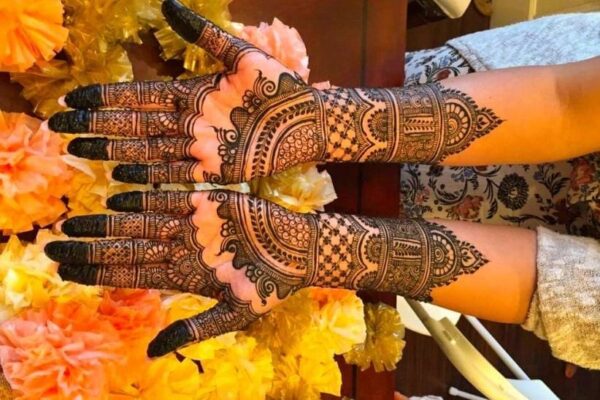 Nirmala Asthana is a fantastic Wedding Mehndi Artist. She creates one-of-a-kind designs based on traditional and religious figure patterns. Arabic, Indo-Arabic, floral, and many other designs are among her specialties. Brides love having her adorn their hands because she is known for her unique art. 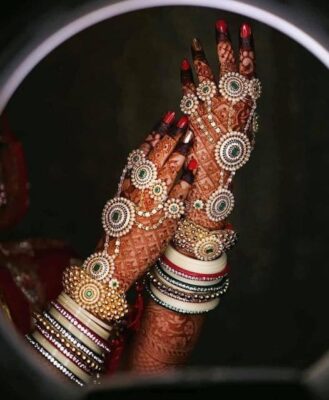 Mayur Mehndi Designers are well-known for their traditional mehndi designs in Chandigarh, Punjab, Haryana, Himachal Pradesh, and Uttarakhand. Their mehndi designs are a combination of art and design, elegance and sophistication, and a unique touch to the event that you will be celebrating. These unique designs are admired and recognised throughout the country. They have designs for a wide range of festivals, corporate events, and family gatherings. 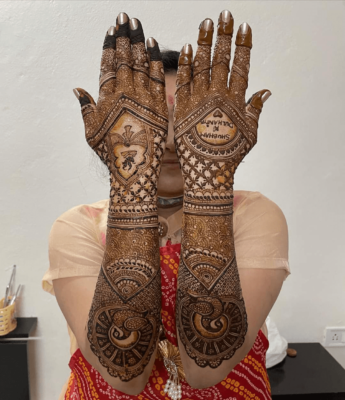 Mayur Mehndi Designers is a group of highly skilled and trained artists who can create detailed, diverse, and artistic mehndi patterns.

They provide a wide range of mehndi designs that are both pleasing and can be customised for specific occasions. To have been within a business for over 20 years and have provided best-in-class artistic services to thousands of clients. They will use your imagination to create a beautiful mehndi design. Their mehndi designs are the result of their creative thinking and years of experience in this field. 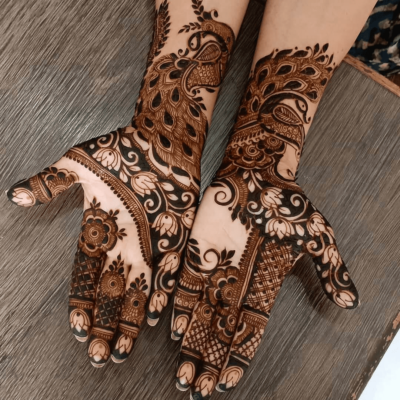 Aman Mehndi Art’s hardworking team can enhance your bridal outfit with perfect Mehndi. They combine the best traditional and contemporary designs to make your Mehndi design unique and personalized. 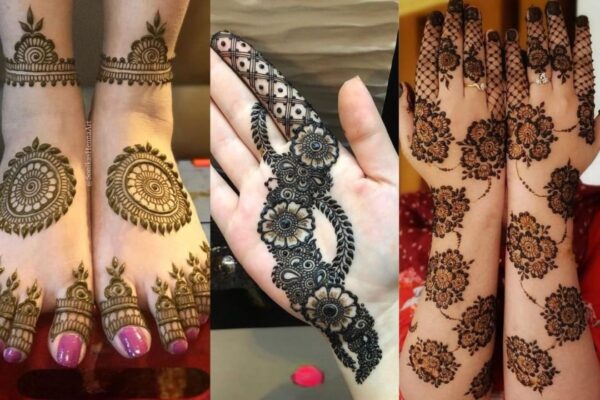 Sanjay Mehndi Art is a team of experienced and dedicated Mehndi artists who create a one-of-a-kind henna design for each bride’s special day. Because the dedicated team travels to other cities, they are an excellent choice for outstation weddings. They are also inexpensive. 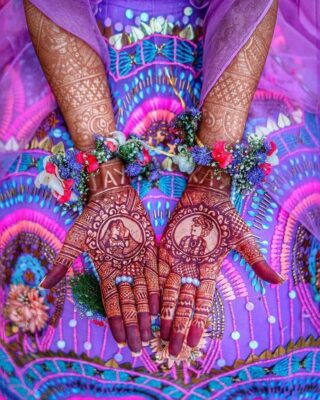 She has been providing beautiful mehndi designs for many occasions, including weddings, for many years. Her bridal mehendi designs start at Rs. 3000 and are made with chemical-free ingredients. Mehndi packages for friends and family are also available. To learn more about her services, please contact her. Bridal Mehendi, Designer Mehendi, Indian Mehendi, and Khafeef Mehndi are among the designs available. 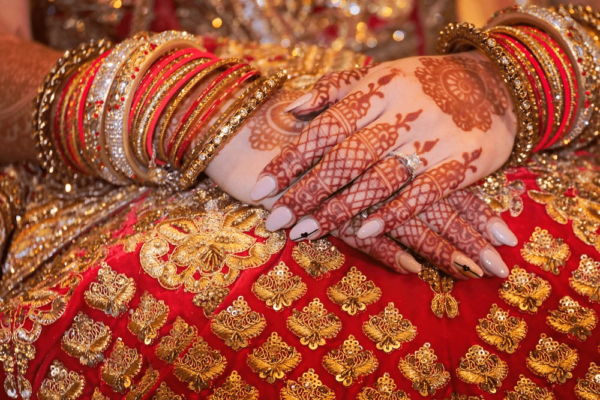 Protects both hands and feet, a Professional Mehndi Artist team understands what their clients expect. They are well-known for their distinctive and distinctive designs, which are executed with finesse and neatness. 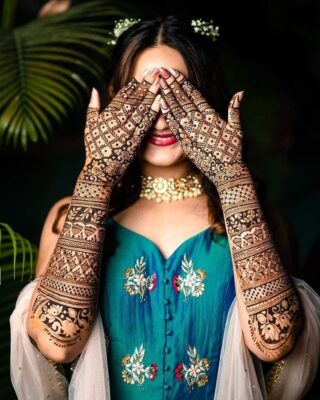 Provides event-specific custom mehndi design. They work according to the client’s demands and requirements to ensure maximum customer satisfaction. Contact them to create something as unique as the occasion! Indian Mehndi Arabic Mehndi is her area of expertise. 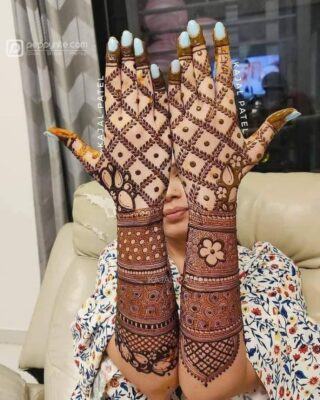 intricate henna designs start at 5000/- and go up from there for brides, with a per hand rate for her family and friends. Their resume and professionalism are both impressive. If their profile makes you feel good, give them the honor of doing the mehndi on your special day! Designs Available: Wedding Mehndi, Mehndi in Rajasthan, Mehndi in Arabic 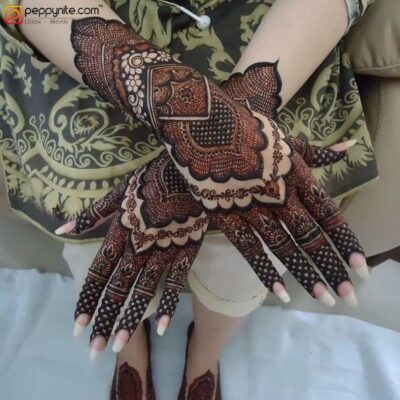 She is well-known for her mehndi designs and patterns, and the henna she uses is herbal and does not cause allergic reactions. Hire her to do your mehndi in a stylish manner.

To achieve a darker tone, apply a sugar and lemon mixture with a soaked cotton ball to the dried mehndi hands and feet. 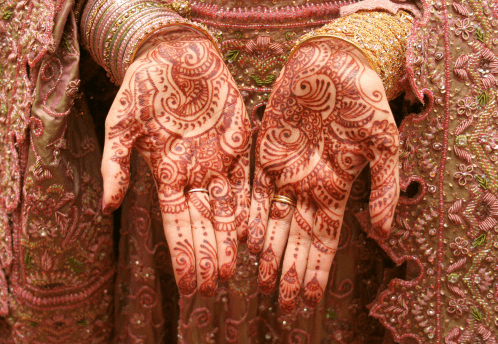 In fect another well-known hack is to heat a few cloves in a pan and give your mehndi some fumes the next day before washing your hands. This will help to darken and extend the life of your mehndi. So that if you’re a bride who loves henna and wants a dark mehndi to stand out, then try these 6 simple hacks!

In India, it is customary to apply mehndi to one’s hands and legs. This custom is observed at various festivals and, most notably, at weddings throughout India. This tradition’s appearance has evolved over time. It is now widely used and considered a fashion trend in the industry. Follow Peppynite to know more about wedding services.