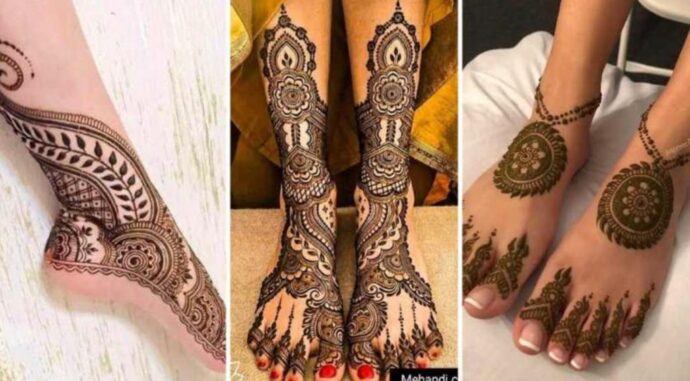 Mehndi is an inseparable part of Indian culture and traditions. The best mehndi artists will agree that almost each and every festivity is incomplete without mehndi designs adorning the hands and feet of women.

One such festival where Mehndi Artists are in high demand is Teej. Hariyali teej is a festival that is celebrated in Punjab, Haryana, Rajasthan, Uttar Pradesh, Madhya Pradesh , Bihar and several other Indian states with a lot of fanfare.

This festival has a lot of significance attached to it. Hariyali Teej festival is celebrated to honour Goddess Parvati and Lord Shiva. It is celebrated on the Tritiya (3rd day) of the Shukla Paksha in the month of sawan every year. Women rise early, take a bath, wear fresh and clean clothes and take a sankalp or vow to keep a day-long fast without food or water, and worship the divine couple, Shiva and Parvati.

Teej does not only have religious significance. The festival is also a celebration of monsoon – a time when nature is at its most verdant green and fertile best. It is only natural that nature motifs are most prominent among teej mehndi designs.

On Hariyali Teej, women gather and pray for the long life and health of their husbands. Unmarried women come together to pray to Goddess Parvati for a husband of their dreams. They celebrate the occasion by dancing and singing devotional songs. They wear new clothes and decorate themselves with solah shringaar – the 16 traditional adornments used by women to beautify themselves. Mehendi is one of the key elements of solah shringaar. Beyond being just a way to appear more beautiful, mehndi has been regarded as auspicious in Indian culture.

Applying mehendi on Hariyali Teej is also considered to be a symbol of fertility. It is also believed that applying mehndi designs for Teej brings good luck too for the couples. There are many beliefs behind applying mehndi on Hariyali Teej. One of the cultural beliefs is that the dark stain of mehndi symbolizes love of the husband for his wife. Some women also believe that the stain of mehndi is indicative of the relation of women with their mother-in-law. A dark stain is symbolic of a happy and peaceful equation between them. Also, if the stain of mehndi lasts for a long time, it also means that their love life will also be long-lasting.

Not just that, mehndi is also said to have medicinal properties and is said to enhance spiritual enrichment. Believe it or not, mehndi is credited with fighting several seasonal bacteria and viruses and also protect from seasonal colds and other infections.

Such is the popularity of mehndi on Teej that women organise elaborate ceremonies and celebrations to apply mehndi on each other. Married and about to be married women get together among song, dance and music; they put up swings and share their joy and happiness and sing odes to Mother Nature.

Celebrate your love for mehndi and also pray for the love of your partners by honouring Goddess Parvati and Mother Nature with specific mehndi designs for teej.

From full-bodied lotuses, to intricate roses and delicate marigolds, flowers are always in demand as the most popular among the mehndi designs that women like to adorn. And it’s only fair! It has been raining and the verdant greenery has led flowers to bloom all around. Why should they not adorn your hands too! Floral patterns of mehndi are also inspired by the Arabic, Mughal, Indian and other cultures as well. One can also add to the beauty of these designs with added bling in the form of stick-on stone and glitters. 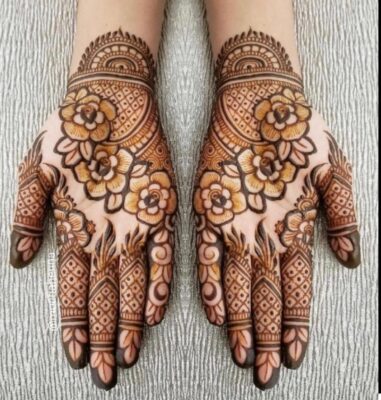 Why not take inspiration from another motif of the monsoon – the national bird of India. With their colourful plumes and beautiful song, peacocks have been a symbol of love since time immemorial. Whether their crescent-moon inspired feathers or shapely eyes, peacock motifs are a favourite with mehndi artists in India. Peacocks exhibit grandeur, opulence, and varied shades of beauty. The elegance of the peacock in the mehndi design is always electrifying. 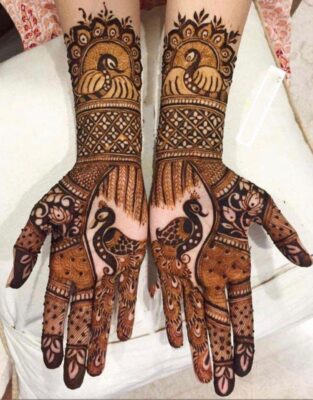 Couple portraits are becoming increasingly popular as mehndi designs. One of the trending things as demanded by women is depictions of bride and groom as part of their mehndi designs. Especially common among women who are engaged, couple mehndi designs are in great demand and are executed with finesse by the best mehndi artists. From a personal love story to a personal portrait, couple portraits can look beautiful on your lovely hands. 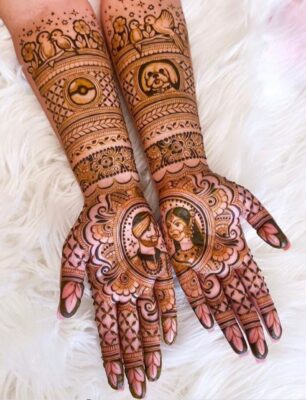 Also Read: How to Choose The Best Bridal Mehndi Artist in India

If there is one kind of mehndi that is considered universally popular, it is Rajasthani style. Characterised by intricate designs, meshes, and delicate vines, Rajasthani mehndi is most in demand by the best mehndi artists. 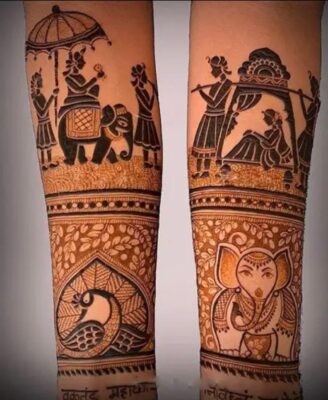 Geometric patterns that are symmetrical are in great demand. Because of their simplicity and old-world charm, mandalas are popular among women of all age groups. The concentric circles are often decorated with florals and bootis to create hypnotic patterns that withstand the test of time. For this reason, mandala mehndi designs will always be in fashion. While some Mandala Mehndi Designs or round mehndi have short and beautiful leafy patterns, others are adjoined to intricate patterns that can cover the entire palm of your hands. Mandala mehndi designs can look good if executed neatly. Therefore take good care to hire an experienced bridal mehndi artist so the patterns can look beautiful. 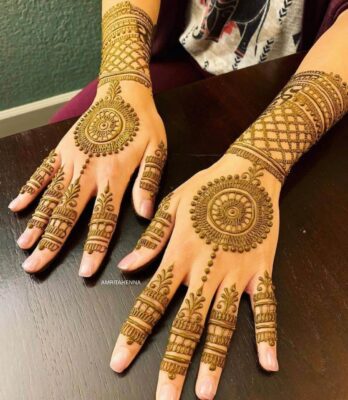 With its nature-inspired theme, arabic designs always look spirited and feminine. Arabic mehndi involves a mix of floral artwork along with geometric patterns, resulting in stunning designs. Arabic mehndi designs are not as intricate and fine in terms of patterns – but with thicker lines and big motifs, they appear bolder and scattered. But a good party mehndi artist will be able to create a truly unique Arabic mehndi design for teej. 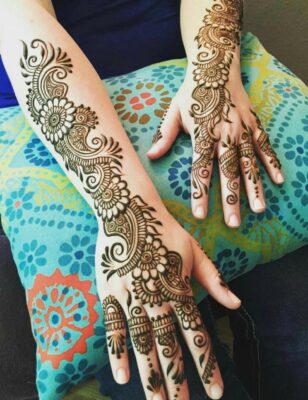 Simplicity is the best form of beauty. There are women who would cherish and want to incorporate minimalism into their mehndi designs. If you want to apply only a little mehndi for shagun on teej, or are a working woman and feel mehndi would interfere with your corporate outfits, then go for minimalistic mehndi. 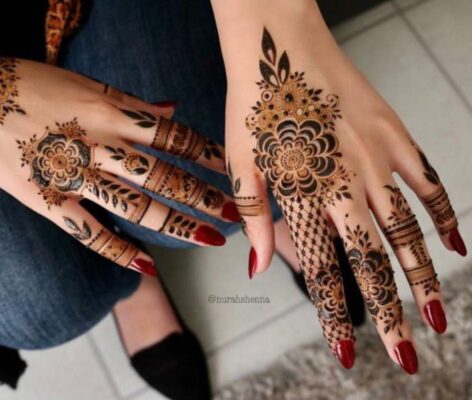 Covering only the palm of hands and employing the free-flowing technique, minimalistic mehndi designs have a characteristic neatness without any dramatic elements. Irrespective of what type of mehndi you want to celebrate teej with, the key element is choosing the best mehndi artist who can translate your wishes into form. At Peppynite, you are sure to find one that vibes with your taste and preferences.