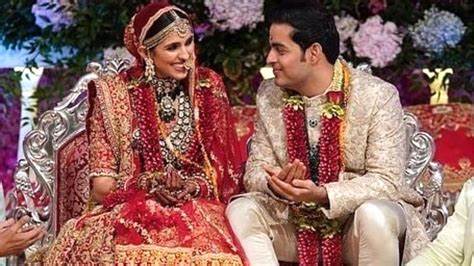 And it’s the wedding season again for the Ambani clan! After the grand wedding of Isha Ambani that happened last year, it was time for her twin brother to get married! Mukesh and Nita Ambani’s eldest son Akash and his childhood sweetheart Shloka, the daughter of diamantaire Russell Mehta and Mona Mehta got hitched together on 9th March.

The wedding is reportedly a three-day affair in Mumbai. The wedding took place at the country’s largest corporate house’s newly-constructed convention centre in Bandra Kurla Complex. Once again, the Ambani’s were ready to don the finest garments from Sabyasachi!

A royal wedding demands everything royal and it all began with the entry of the bride and the groom! Have a look how elegant it was!

And then it was the bride’s turn!

Nita Ambani performing the sacred rituals with the bride and the groom! How lovely it is to see something so surreal and as pure as mother’s love!

This is one of the most beautiful and heartwarming moments for a bride which she’ll never forget for her entire lifetime! Shloka Mehta gets a bit emotional while Akash performs the sacred rituals.

Followed by the grand ceremony, the Ambani’s hosted a lavish reception for family, friends, and B-stars at the same venue. The bride was seen in a golden colored lehenga and the groom was complimenting her in his indigo blue colored kurta.

The most wanted music band of all times, ‘Maroon 5’ performed live at the wedding ceremony of Akash and Shloka. The couple performed and they looked so adorable!

Here is a sneak peak into the royal wedding of Akash and Shloka.

No Ambani wedding is complete without Nita Ambani’s iconic performance! Dancing like the happiest mother, a video of Nita Ambani has hit the web where you can see her pulling off a classical dance on Lord Krishna’s bhajan with much beauty and grace.

Pre-wedding ceremonies of the couple started at their home with a musical Garba-night and then the family flew to Switzerland for the Sangeet and pre-wedding bash. Many B-stars and sports personalities were part of the grand celebrations.