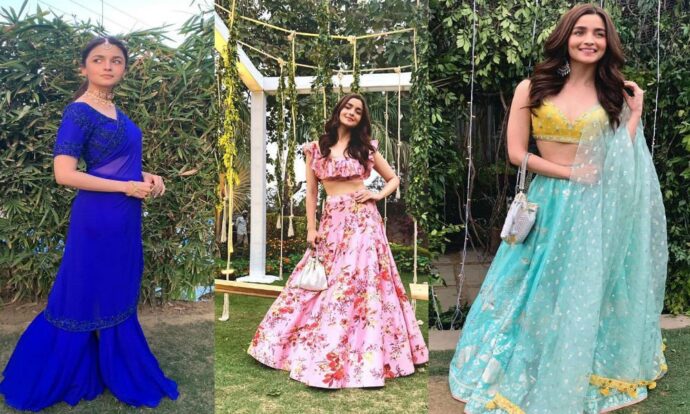 The super talented Alia Bhatt recently attended her best friend Devika Advani’s wedding in New Delhi and gave us some major bridesmaids goals. Earlier also, she was seen as the bridesmaid at her best friend Kripa Mehta’s wedding. The pictures from the wedding ceremony have gone viral and the actress undoubtedly slayed in all her looks.

Alia posted a picture of the couple with the caption, ‘There’s no better feeling than watching your best friend marry the man of her dreams and her best friend’s dreams. The wedding was all things beautiful. Can’t believe my baby girl is married. I love you guys…

For the sangeet function, Alia chose a floral attire and for the big day the actress wore a stunning navy-blue coloured saree designed by Manish Malhotra. She took to Instagram to share a picture of hers with the caption, ‘Brides-maid’

How lovely these bridesmaids look together, celebrating the love and the bond they share. Alia wore a lehenga designed by the very talented Anita Dongre.

One of the most heart-warming pictures that took over the internet was when Alia held back her tears during the rituals. Such a stunner she is!

The versatile actor had left no stones unturned to play her part as the devoted bridesmaid as she even turned in a hilarious and sentimental speech at one of the ceremonies and danced her heart out to various Bollywood’s hit tracks at the sangeet.