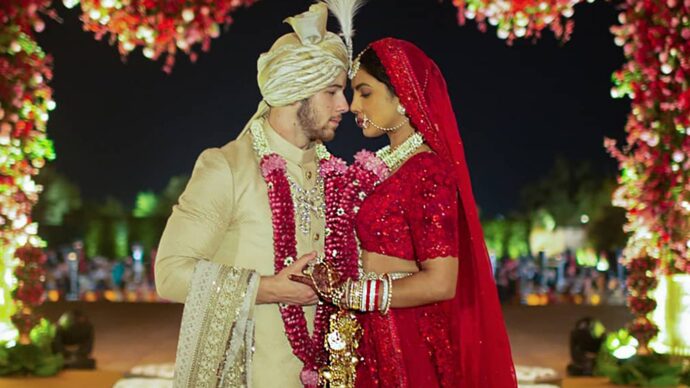 Just when the glitter around DeepVeer’s wedding began to settle down, a new wave of sparkles has descended over town with Priyanka Chopra and Nick Jonas sharing pictures from their wedding ceremony. The couple’s wedding had two ceremonies honouring Hindu and Christian traditions. They kicked off their extravagant three-day wedding celebrations with Mehendi and a sangeet ceremony followed by the wedding. All the ceremonies took place at The Umaid Bhawan Palace, Jodhpur.

Our Desi Girl chose to wear a multi-hued organdy ensemble, inspired by a vintage Abu Jani Sandeep Khosla collection teamed up with heirloom jewelry. Nick looked dashing in an aqua bakhiya kurta from the same designer.

Priyanka and Nick had a dreamy sangeet where efforts from both sides filled them with gratitude and love. Priyanka looked absolutely stunning in a fully hand-embroidered sequins saree and Nick looked no less than a prince in a blue sherwani with silk thread detailing.

Prick tied the knot in a Christian service, officiated by Nick’s father Paul Kevin Jonas, Sr. at the Jodhpur’s Umaid Bhawan Palace. Jonas wore a Purple Label tuxedo and Chopra was stunning in a custom Ralph Lauren gown as they took their vows. A piece of bride’s dress was concealed in a part of the label right above the groom’s heart with the words ‘My Jaan’ embroidered on it.

Prick’s Christian wedding dress had eight special words and phrases that were incorporated into the embroidery pattern of the coat. The placement of the groom’s full name, Nicholas Jerry Jonas at the front and just over her heart, the word ‘love’ was stitched in ivory thread.

A Kanauj-Rose lehenga was designed by the Sabyasachi for the Hindu ceremony. A layer upon layer of threadwork embroidery creates this piece of impossible couture. It took 110 embroiderers from Calcutta and 3720 hours to create the bride’s modern masterpiece.

The couple hosted their first wedding reception on Tuesday at the Taj Palace Hotel in New Delhi. The groom chose to wear a velvet tuxedo, while the bride changed wore a gold lehenga, reportedly by Falguni Shane Peacock, India. This reception was also attended by Prime Minister Narendra Modi as well.

On December 19th Prick hosted another wedding reception for family and close friends at JW Marriott in Mumbai. The newlywed bride opted for a royal blue and gold dress, whilst Nick went with a dark grey suit.

Yes, there’s another one! Debuting yet another stunning outfit, Chopra stepped out in Mumbai on December 21st wearing an outfit designed by Abu Jani Sandeep Khosla. The attire featured a baby blue tulle skirt and top with ornate blue and blush detailing.

Jimmy Fallon asked the couple if they had a celebrity nickname, Nick confessed with an excitable smirk, “She likes Prick”. Reasonably, Nick admitted that he isn’t sold on his bride’s choice: “I don’t like that one that very much.”