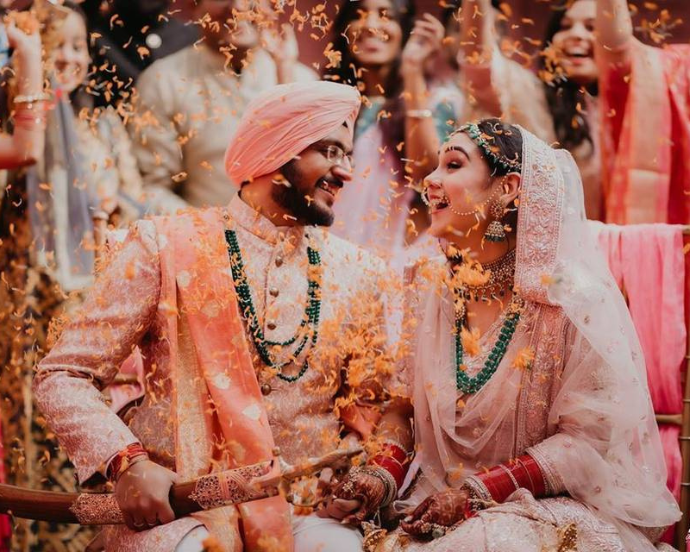 There is more to a Punjabi wedding than just music, dance, and Patiala pegs. Here is a step-by-step explanation of Punjabi Wedding Traditions, from the Roka to the Vidaai. Welcome to the wonderful, vibrant world of Punjabi weddings.

The word “Roka” is derived from the word “Rokna,” which means that the bride and groom can no longer search for other potential spouses because their relationship is now solidified. The family of the bride and the groom exchange sweets, dry fruits, savoury foods, and other items while at one other’s homes. The pair must sit together throughout the “Thaka” ritual, during which they are showered with gifts or shagun and are deemed to be legally engaged. 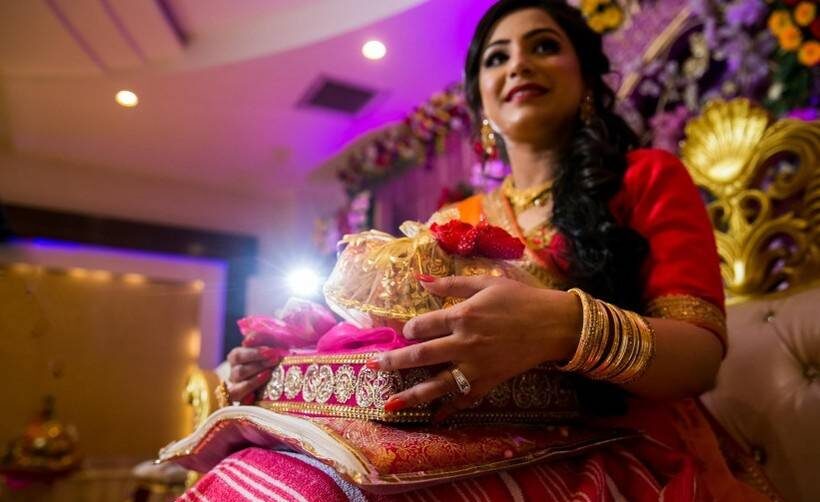 The bride’s family is visited by relatives of the groom’s family who bring jewellery, presents, sweets and a red chunni or chunri. Chunni chadana, or placing the chunni over the bride’s head, is the name of this ritual. 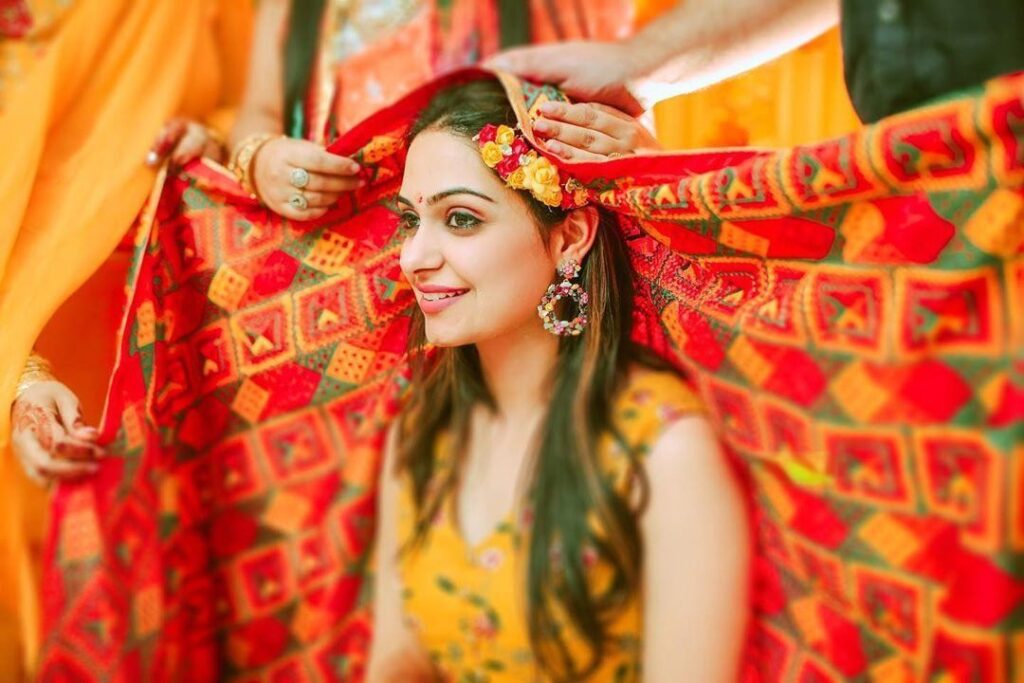 This ritual is held on the same day as the chunni chadana in the majority of Punjabi families. Some families prefer it to be a quiet and small gathering, while others invite many friends and throw a lavish party. In the course of the ceremony, the bride and groom exchange rings and receive presents. 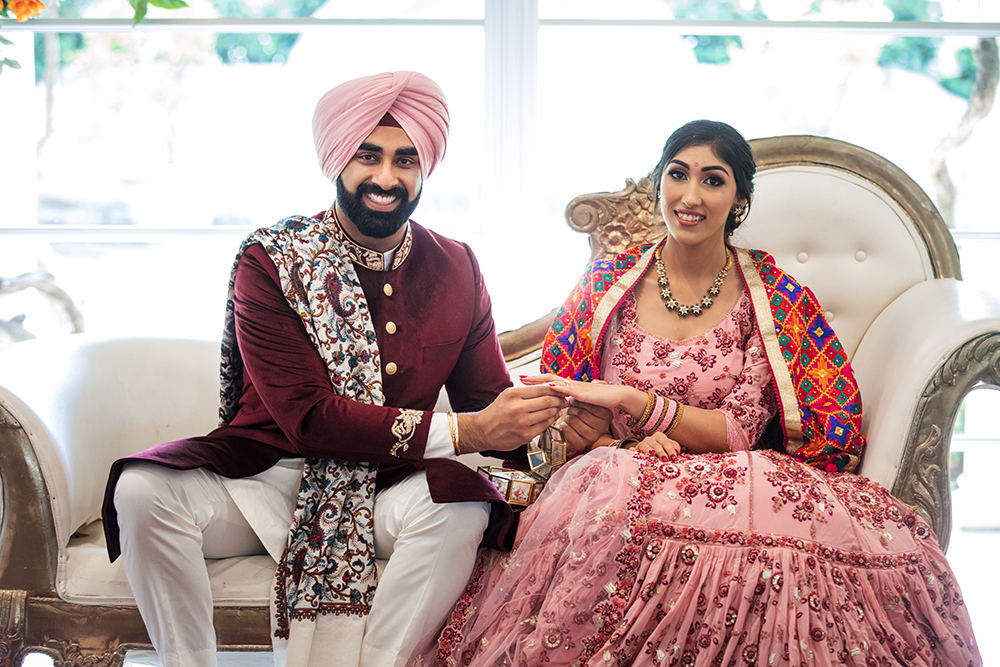 The mehendi ceremony is a must-attend component of wedding festivities for every traditional Indian bride. The bride usually goes all out in choosing the best and most unique designs when getting henna done to her hands and feet.

Other girls and women, both married and single, in addition to the future bride, also receive mehendi application. The bride and groom’s homes are the venue for this event, which is attended by their respective guest lists. 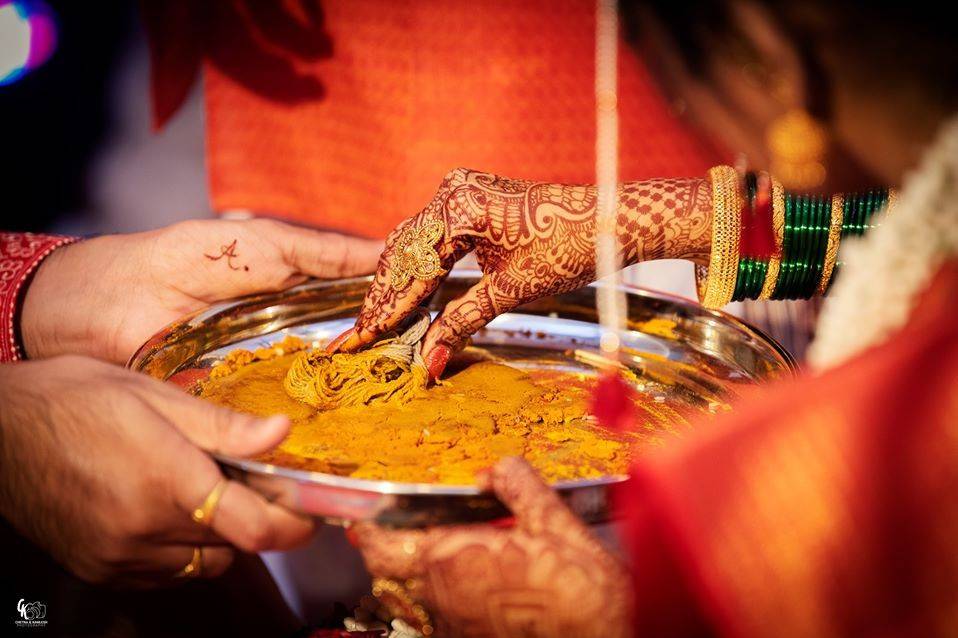 Sometimes the sangeet ceremony follows the mehendi on the same day. It occasionally occurs on a different day entirely. This ceremony’s every component is magnificent, opulent, and oh-so-fun. The couple and the guests are kept busy with dancing, singing, games, and activities. 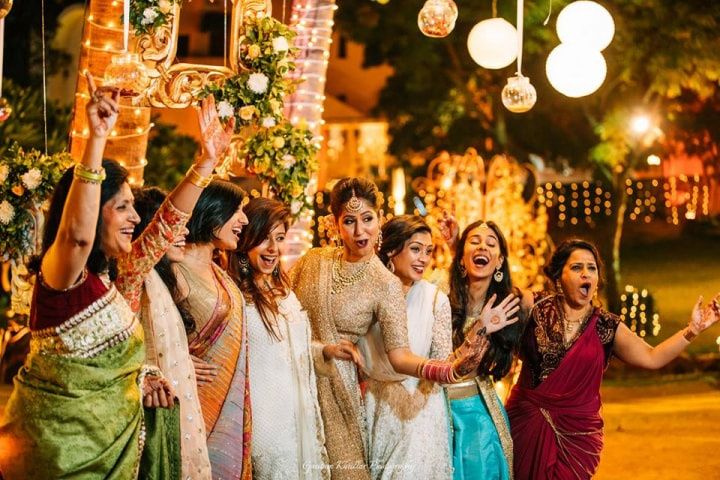 On the morning of the wedding itself, this ceremony is performed. The bride and groom are each given a mouli, or sacred thread, to tie on their hands in their respective houses. It is regarded as a protective charm against evil. 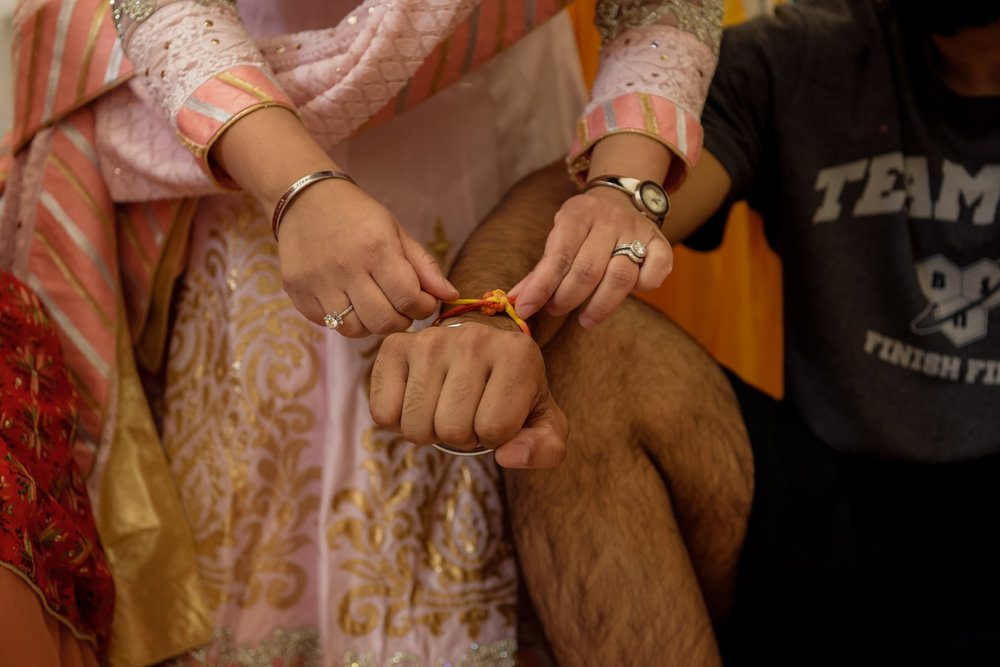 A set of 21 bangles, mainly in red and ivory, is given to the bride by the bride’s mama and his wife. First, the bangles are cleansed in milk and rose petals, and then the mother puts them on for his niece. The bride isn’t supposed to see these bangles, therefore they are quickly covered with a white towel. It’s thought that viewing the bangles before the ceremony starts will bring bad luck. After her wedding, a typical bride wears these bracelets for a month. 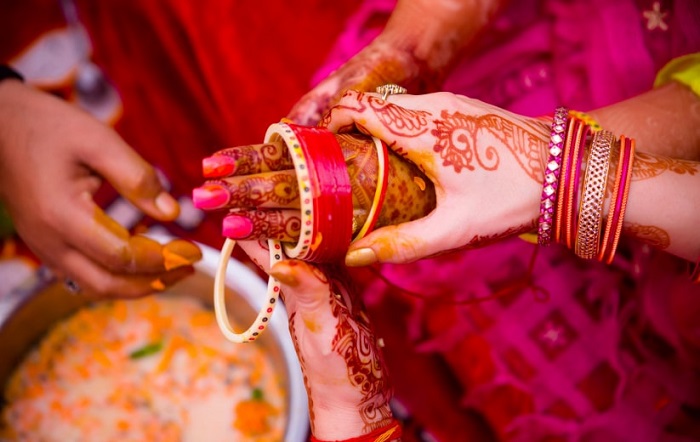 This family celebration, which takes place the evening before the wedding, is a boisterous party with music, fireworks, dancing, and sweets in front of the tastefully decorated home. The maternal aunt carries copper jugs ornamented with lit candles as another woman rattles a stick attached with bells.

The family sings traditional songs while visiting friends’ and relatives’ homes, where they are given treats and invited to participate in the fun. This custom is frequently abandoned out of personal preference or practicality, particularly in destination weddings.

This ceremony, which is connected to the chudha ceremony, happens right after the bride dons her bangles. This typically gold jewellery has more purposes than just elevating the bridal look. Actually, it represents health, a happy marriage, and fertility. The betel nuts or dried fruits that are typically used to decorate these kaleeras.

The bride is expected to shake the kaleeras over the head of an unmarried girl during the customary ceremony in order to wish for her to get married next. It is said that she will be the next in line to get married if the fruit or betel nut falls over her head! 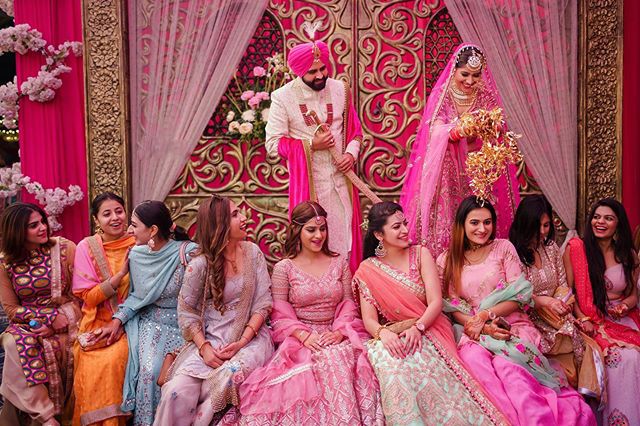 The bride and groom’s bodies are covered in a mixture of rosewater, turmeric, sandalwood, and mustard oil by the women of the home. The new-age haldi rituals are a riot of dancing, joy, and celebration! 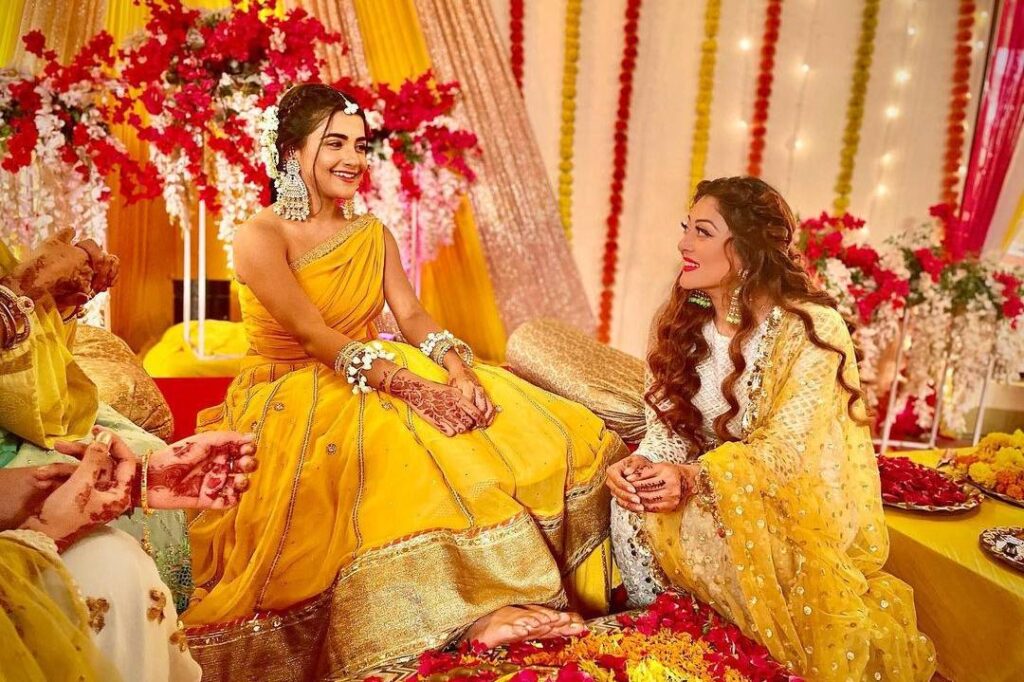 In the Ghara Gharoli ceremony, the bride’s sister-in-law goes to the nearby temple to collect holy water, fill a gorgeously adorned clay pot (the Gharoli), and bring it to the bride. After her Vatna (Haldi), the bride then bathes in this water and begins getting ready for her wedding. After that, the bride changes into her wedding dress.

The clay pitcher was originally filled with water from the well, but since things have changed, this is now done at the closest temple. The same ceremony is performed at the bridegroom’s home as well, however the water for his ceremonial bath is provided by the sister-in-law of the groom. 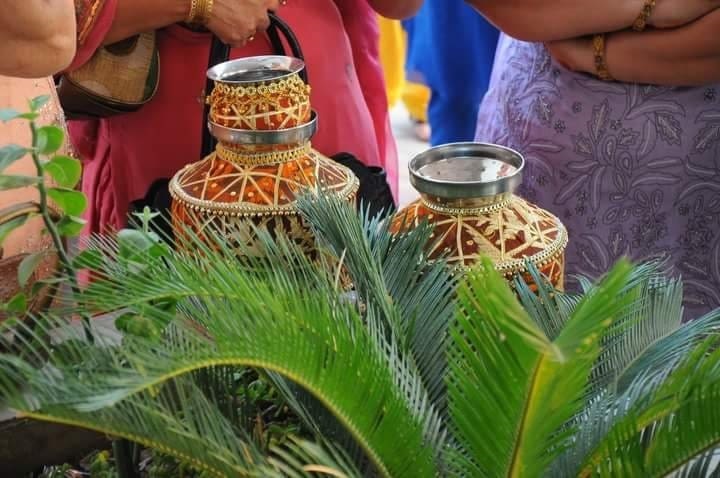 The groom’s sister binds the Sehra after the groom is dressed in his Punjabi wedding outfit, as part of the Sehrabandi ceremony. Before the groom walks down the aisle, a little puja is done to fend off the evil, and all the family members present at this ritual frequently give the groom presents as a gesture of their well wishes and luck. 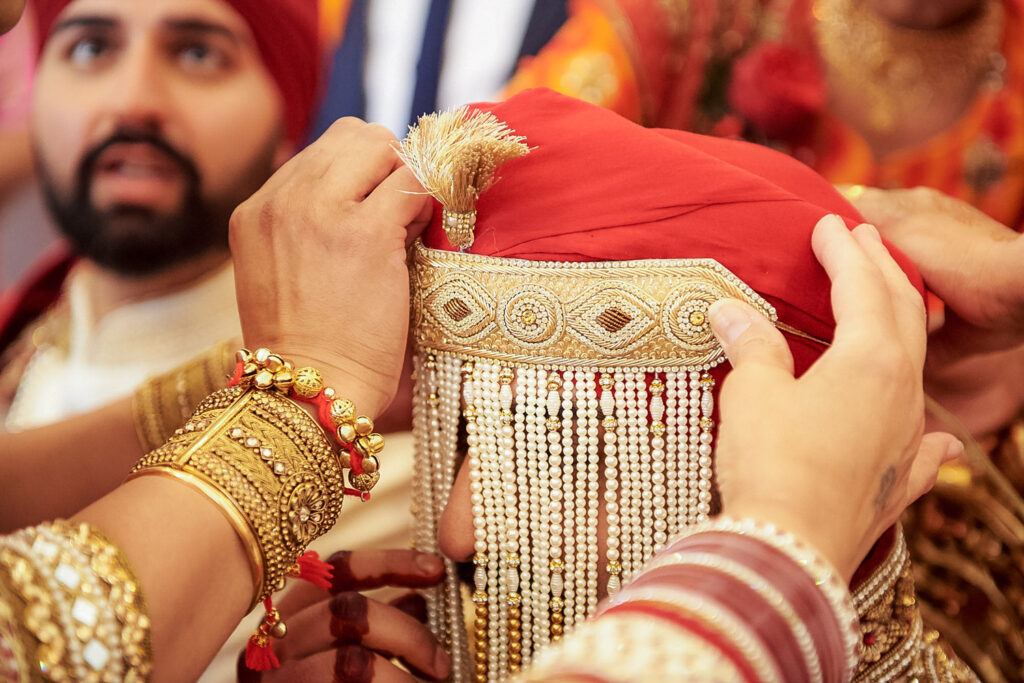 One of the most loved and eagerly awaited rituals of an Indian wedding is the groom’s extravagant horse-drawn entry. According to custom, the female relatives of the groom feed the decorated mare, which is covered with a tikka, chana dal (lentils), and water. The groom then mounts the mare, known as the “ghodi chadna,” in great style and departs for the location with his dancing entourage, or “baraat.” 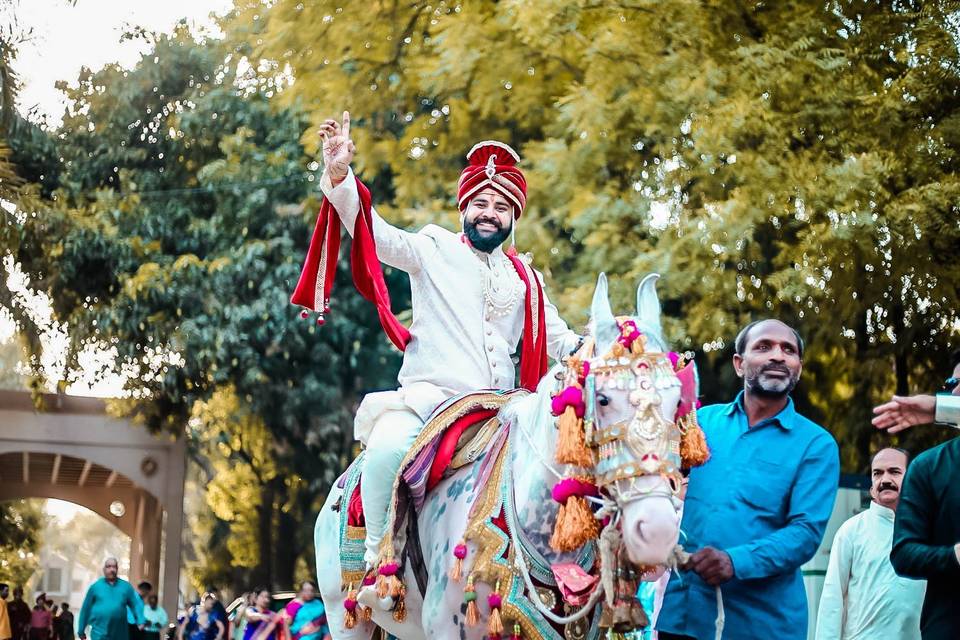 The bride’s family extends a cordial greeting to the groom and the baraat at the wedding location. Then, the relevant relatives of the bride and groom embrace and extend their welcome. For Milni, the bride’s maternal uncle welcomes and meets his maternal uncle, and so on and so forth. 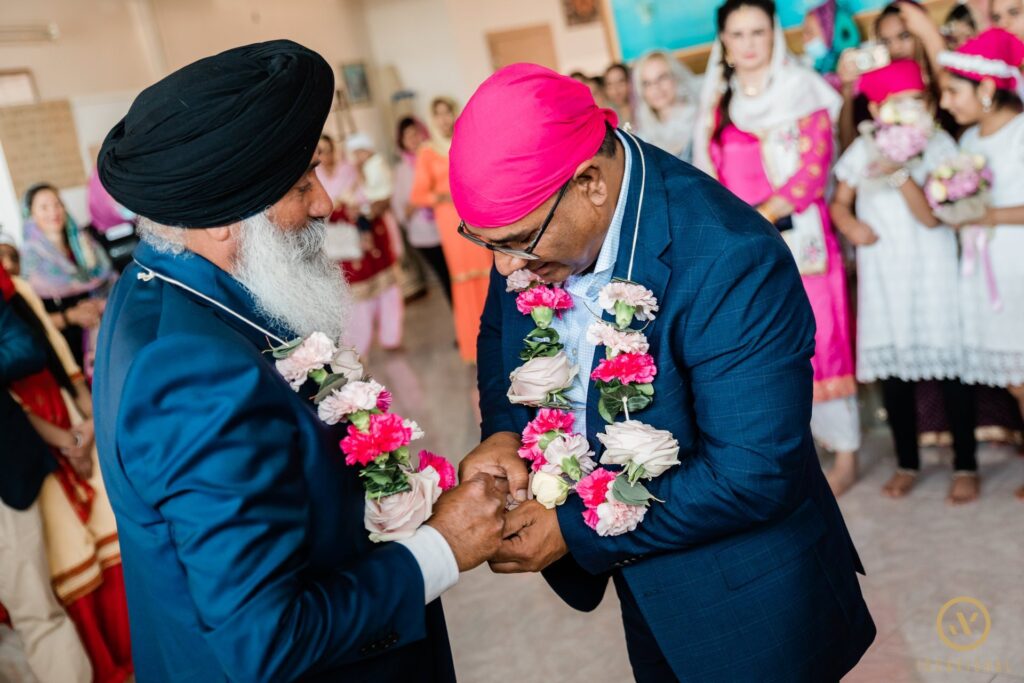 The Varmala is the customary garland exchange that the couple conducts when they first encounter one other. It is a joyful event that is loved by the couple, their family, and the guests equally. The bride enters and ascends the platform for the ceremony after the groom is taken to the stage upon arrival. The couple’s friends frequently pick them up, making the exchange more entertaining. 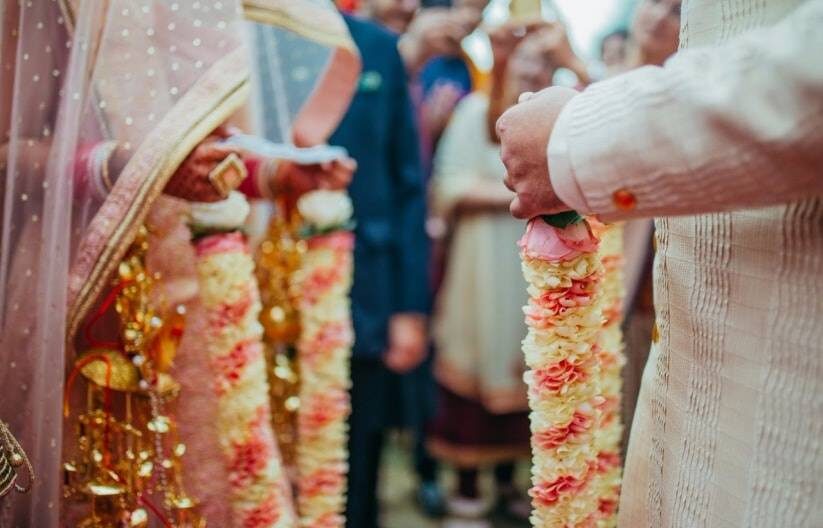 The Kanyadaan marks the rite of the father giving his daughter’s hand in marriage, a ritual that is prevalent in one way or another in every country and religion on earth. He asks the groom through Vedic mantras to look after his daughter, and when the groom accepts her hand, he promises to love and guard her till death separates them. 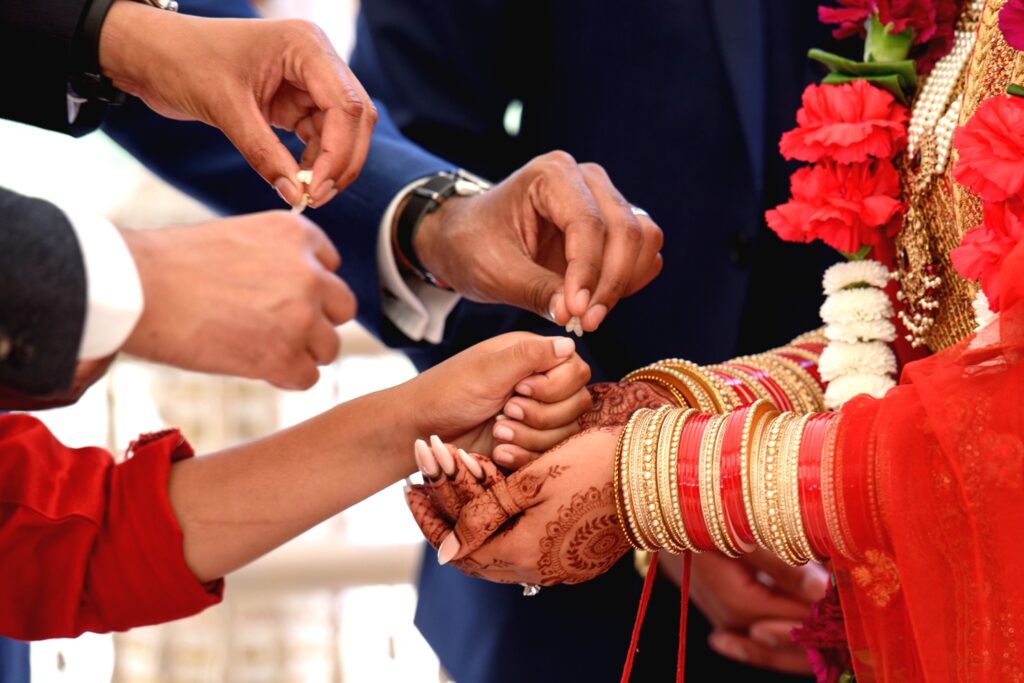 The pair rises for the ritual. The ends of their drapes are linked together to symbolise their union, and as chants are recited, they circle the holy book of Sikhs (Guru Granth sahib Ji) four times to represent their vows. For three of them, the bride goes before the groom, and for the fourth, she comes after. In the eyes of the fire goddess, the pair is already wed. 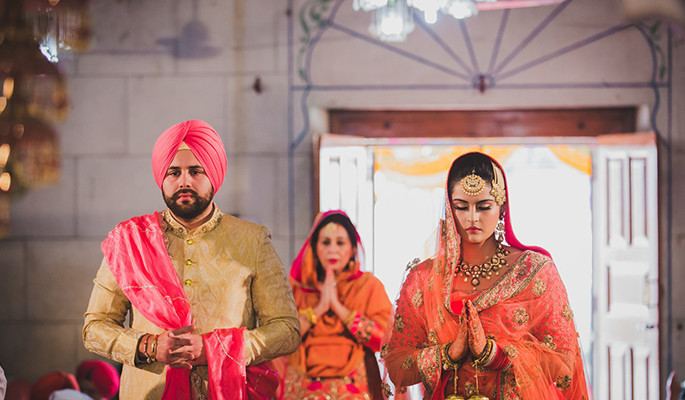 The bride’s brother gives her puffed rice for this rite, which she and the groom offer to the fire and ask for blessings. Three times the process is performed. 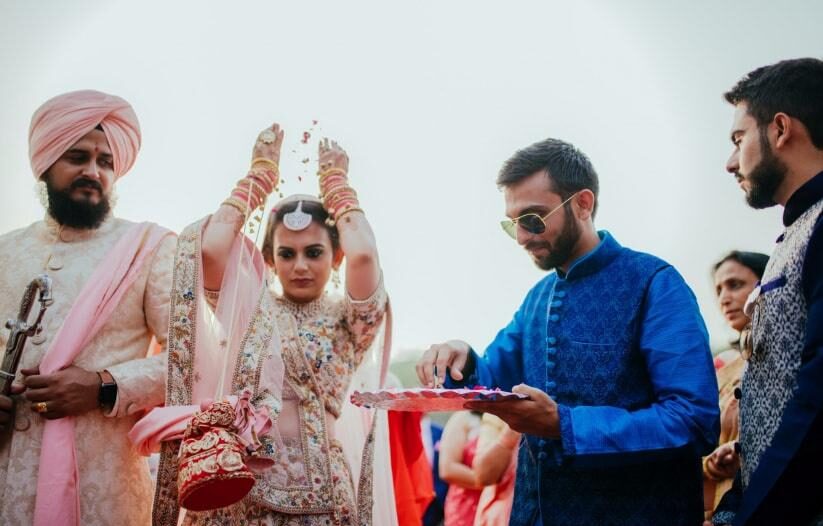 Another cherished wedding custom is Joota Chupai, which involves stealing the groom’s shoes and hiding it. They demand a ransom in exchange for his shoes after the wedding. The groom only receives his shoes back after giving his sisters-in-law what they want after much teasing and pointless haggling. The bride is getting ready to leave her house and her family, thus the final farewell in the Vidaai is a bitter-sweet event. Following the emotional hugs, the bride throws a handful of rice over her shoulder in gratitude to her home for taking care of her.

She then joins her husband in a wedding procession known as a Doli and drives off to their new house in a car that has been decorated. The mother-in-law hands the bride a glass of water and swirls it around her head in a manner akin to the Grihapravesh before inviting her to drink.

This represents that the bride is accepted and warmly welcomed into her new house by the groom’s family, and the ritual is known as a paani bharna ceremony. Following this is a ritual in which the bride enters the new home by kicking a brass pot loaded with rice with her right leg. 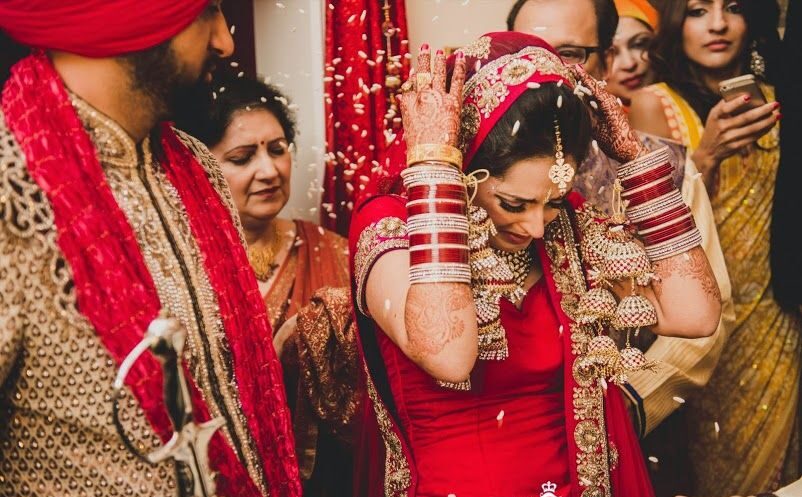 The majority of the customary games that are played in the groom’s home kick off the post-wedding festivities. One of the games involves placing the ring or the string of ornaments tied around the bride’s wrist during the Vhura ritual into a bowl of milk, coloured water, rose petals, or some other suitable liquid.

The rule of thumb is that whoever finds the wedding bands first will be in charge of the marriage. There are numerous other such activities, and they are really a terrific way for the bride to meet people in her new home. 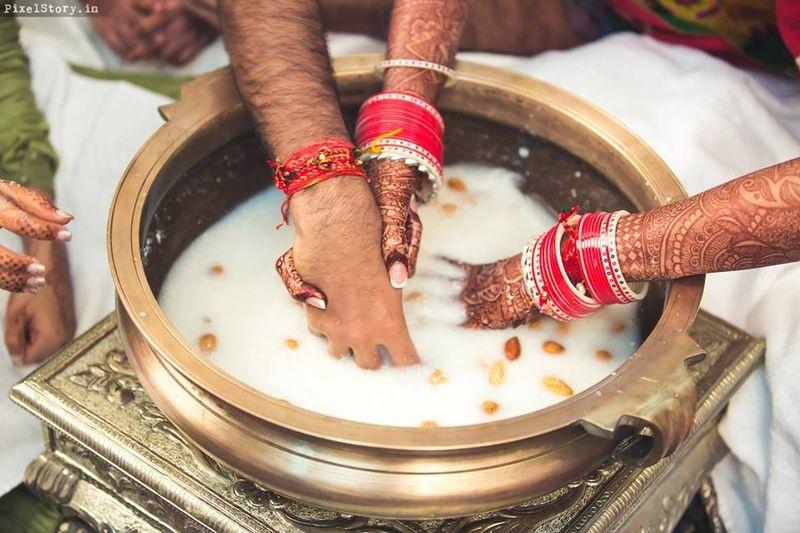 The bride-to-be is formally introduced to the groom’s family and friends at the reception ceremony. With the participation of the guests who weren’t invited to the wedding, this is frequently a formal celebration. These guests can also receive unique information and details on your Punjabi wedding card. 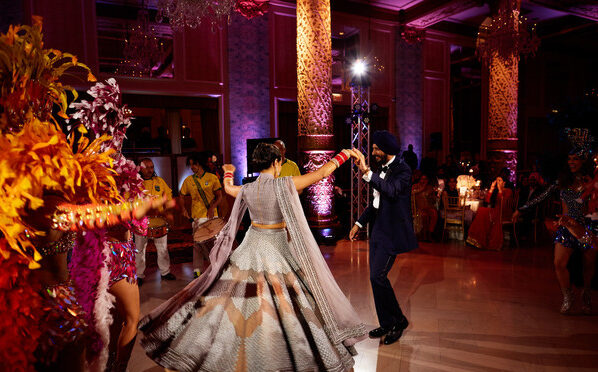 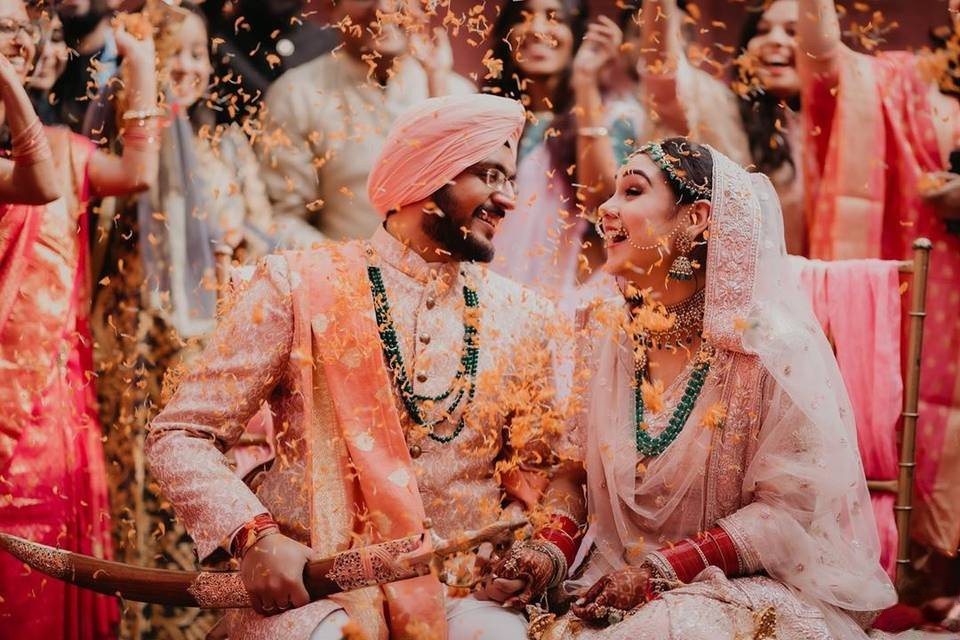 Peppynite, which is renowned as one of the Top Wedding Service Provider in India, is one such business that stands out in the India for its amazing wedding services such as photographers, mehndi artists and makeup artists. Peppynite has the talent and knowledge to immortalise your special day in a way that is lovely and timeless.

One comment on “Punjabi Wedding Traditions: Decoding the Customs & Ceremonies”