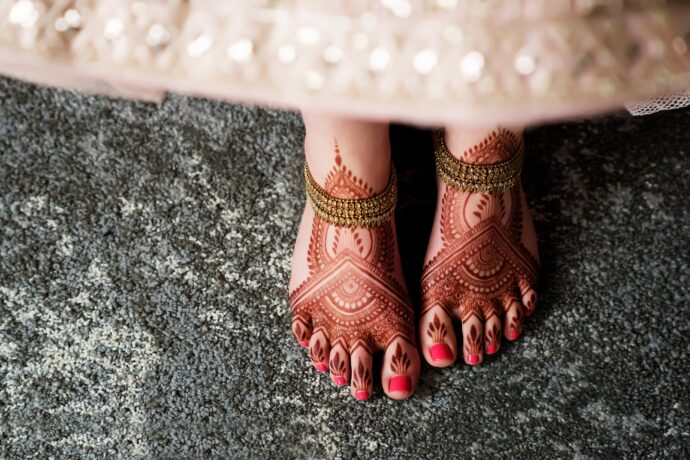 The shade of the mehndi might reveal a person’s true feelings for their partner.

Mehndi Designs have been the topic of conversation for an exceptionally long period of time. Everyone speaks about the charming and beautiful hand mehndi designs, but nobody ever mentions the leg mehndi designs. The design of a woman’s leg mehndi has just as much significance as the design of her hand mehndi, regardless of whether the lady is a bride, a bridesmaid, or is getting ready for a celebration. However, when it comes to picking the design for the leg mehndi, ladies tend to get confused and are unable to choose the pattern that would be the best for them. Peppynite.com is concerned about the happiness of each and every woman, which is why we have selected one of the most beautiful leg mehndi designs for the most beautiful women

Take a look at this article to see which leg mehndi design is suitable for women! Choose the one that reflects your personality and preferences, then have your henna artist create something as beautiful as these! 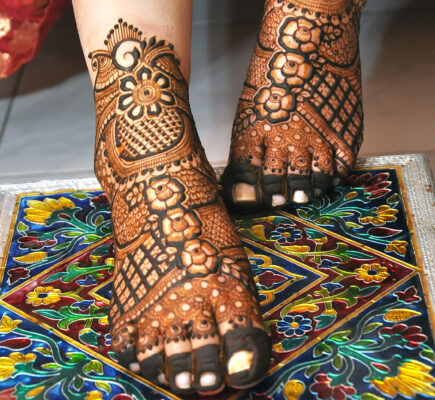 Flowers are a decent choice that will never let you down. Every woman wants to have this simplistic mehndi design including flower motifs, a jaal pattern, and symmetrical patterns on her legs. The floral mehndi design is an age-old design that always results in an appearance that is elegant and beautiful. A woman may give her foot a wonderful look by considering gorgeous and unique floral Mehndi patterns on her legs. This will help her stand out from the crowd. The elegant flower Mehndi patterns are not only simple and easy to draw, but they also serve to highlight the overall Mehndi appearance. 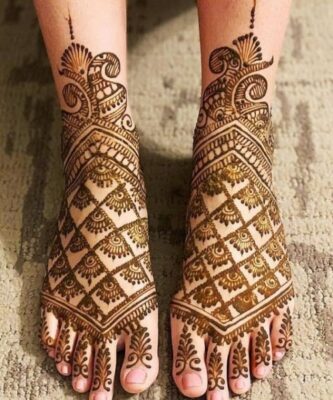 As a result of its easy application and a short time to prepare, the jaal mehndi pattern has become increasingly popular these days. The jaal pattern design appears particularly stunning and classy when worn on the feet of ladies. Those who wish to cover their whole foot with mehndi might consider using jaal mehndi patterns as their motif of choice. So, brides should discuss the possibility of having this type of mehndi design for weddings with the mehndi artist who will be doing their mehndi. 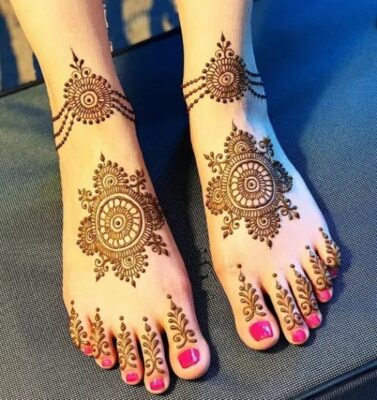 When it comes to choosing a design for their mehndi design, every woman has her own unique preferences and interests. Some prefer complex and ornate designs, while some favor basic patterns. And if a woman’s preferences lie midway between these two categories, then the mandala mehndi design is the perfect choice for her. Mehndi designs with mandalas are quite popular and one of the most often used. This pattern is ideal for the kinds of ladies who do not want a lot of mehndi on their feet. This mehndi design has gorgeous circles, which are said to represent wellness and completeness as well as a connection between people. 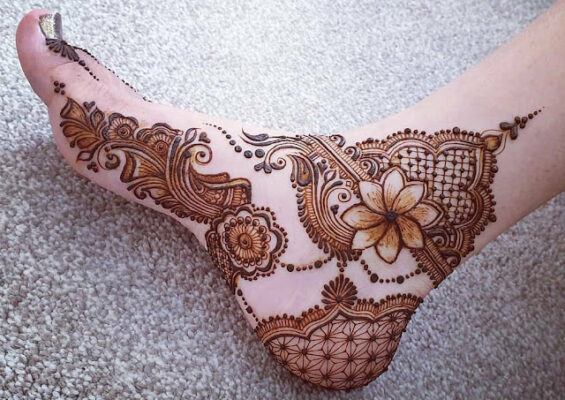 If you’re looking for a mehndi design that’s easy on the eyes and delicate, the side mehndi design is your best option. This particular pattern of mehndi provides a woman’s feet an elegant appearance, while the rest of her part seems to be clean. You may fill in the rest if you wish to add additional specifics to the description. It is made up of a variety of delicate flower designs and tendrils, both of which contribute to the design’s overall appeal and beauty. 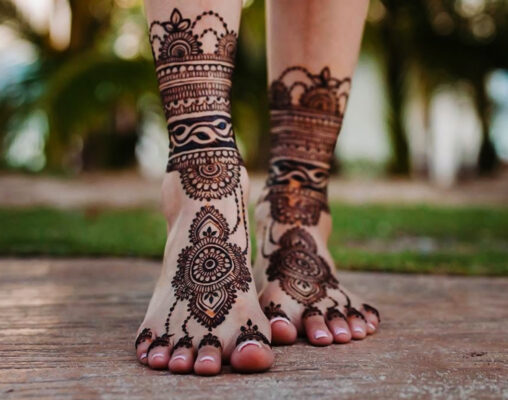 Each and every woman adores jewelry, and the same can be said for the delicate mehndi patterns that are inspired by jewellery. This design is receiving considerable praise from women of all ages across the deck. Jewelry design mehndi often incorporates elements of both mandala and other types of mehndi designs. This design gives off an air of elegance while yet having a contemporary feel to it. If a woman wants her mehndi design to complement the jewelry she is wearing, she could choose one of the jewelry-inspired mehndi designs. 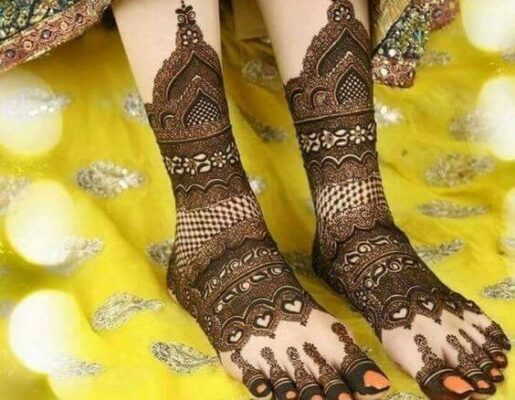 Every woman wants everything to be perfect when it comes to its mehndi and details matter the most. For the women who want their mehndi designs to be highly clean and detailed then they can go for detailed mehndi designs. This design consists of detailed patterns and exclusive designs. This design is the most preferred choice of every bride as it will fill up the whole legs and give a royal and sophisticated look. 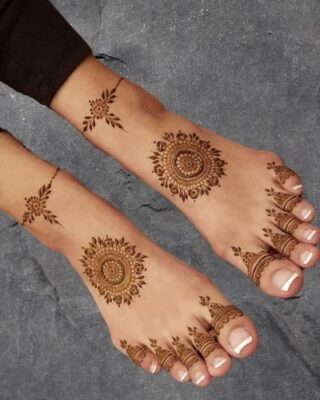 Although the majority of women select elaborate mehndi patterns on their legs, there are a few that want something far simpler. And for such ladies, the minimal mehndi design is the one that works best on them. This pattern incorporates a little portion of each and every mehndi design and ’s gorgeous when applied on the legs. This pattern may be embroidered onto any portion of the leg, including the toes, knees, and ankles, for example. 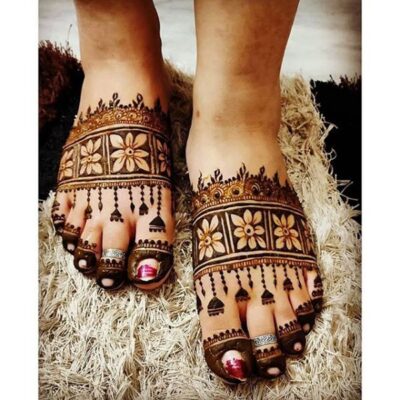 The design of band mehndi is most often desired by college-aged girls and women. This design offers the impression of being contemporary while being subtle. After being worn on the legs, this design gives the impression of being a pair of slippers and has a very classic appearance. This design is a combination of an asymmetrical mehndi pattern and any other pattern that involves just a little amount of use of the mehndi. 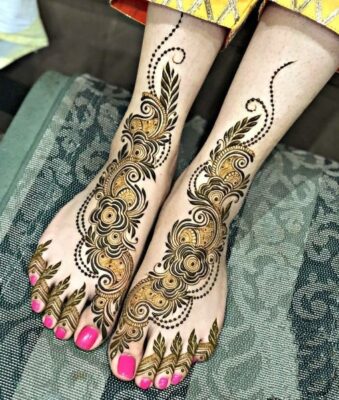 Paisley mehndi designs are the best option to choose for a woman who is searching for a mehndi design that is both traditional and has a hint of the modern about it. It is a combination of the classic paisley patterns with the more trendy dots and leaves motifs. This pattern not only makes your feet seem more attractive but also imparts the grace and sophistication of a classic mehndi design. The application of this mehndi pattern may be very easily combined with any other mehndi design. 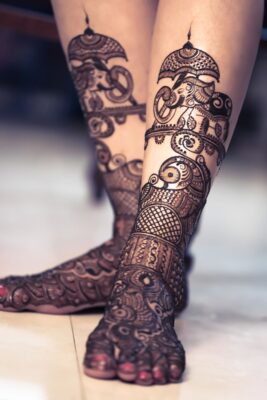 In addition to flowers, elephants are often one of the most popular motifs that are used in all different kinds of leg mehndi designs. Even if there are a lot of patterns that reflect tradition, this elephant pattern with delicate leaf motifs is the one that not only covers up your whole leg but also adds beauty to the way the bride appears. You may make a variant by adding unique designs rather than repeating ones that are already there. 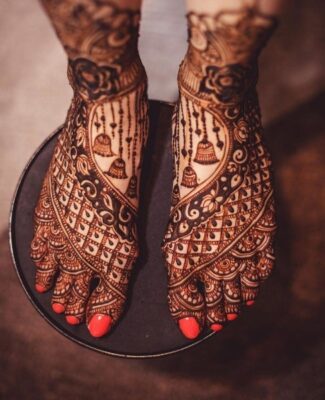 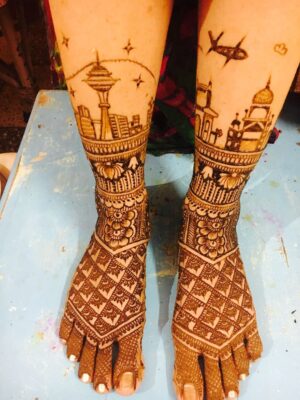 If a woman is looking for a mehndi design that is unique and distinct from the typical paisleys, peacocks, and flowers, then this mehndi design that is inspired by a love story could be a perfect choice. In this design, she has the option of including anything she wants, whether it be from her love story or from memories that are very important to her. This lovely pattern may be the sweetest thing she could give to the person she loves as a gift from her side. 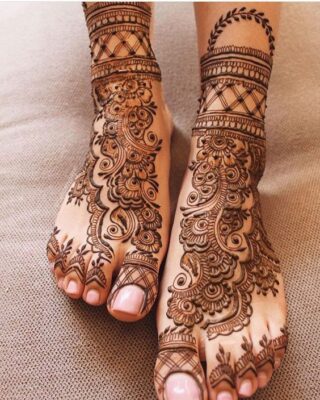 The Arabic mehndi pattern is the one that is most desired by women, regardless of whether it is applied to the hands or the legs. Every lady wants her mehndi to have the same degree of expertise and attractiveness as Arabic mehndi designs, which is why it’s so popular. This design takes up less time yet manages to give the legs an impressively detailed and spotless appearance. Paisleys, flowers, and leaves, along with other motifs, have been included in this pattern. 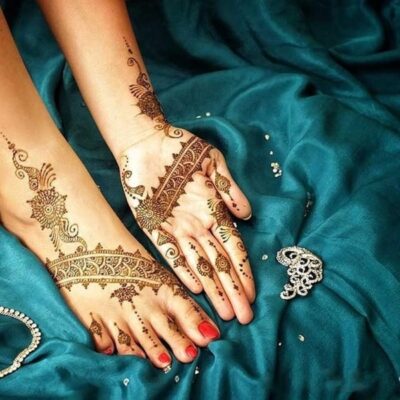 The Arabic mehndi design has been modified to create the current style of trail mehndi, which has simpler patterns and less intricate detailing. This mehndi design covers half part of the leg and left the other bare. The trail mehndi pattern is often used with the jaali mehndi design to get the desired overall effect of the mehndi. This mehndi style is perfect for women who like keeping their mehndi simple but yet want to include something lovely into their design. 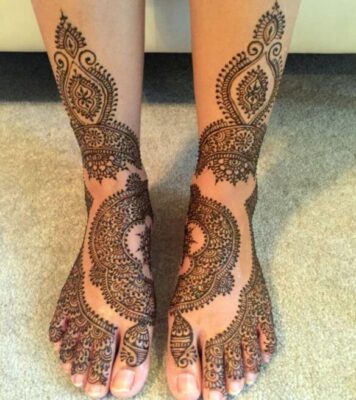 It is one of the heavy mehndi designs, the mirrored mehndi design is often used for bridal applications. A mirror image effect is achieved by repeating the design on both legs. Everyone like this pattern since it seems so affectionate and wonderful when it’s on her legs.