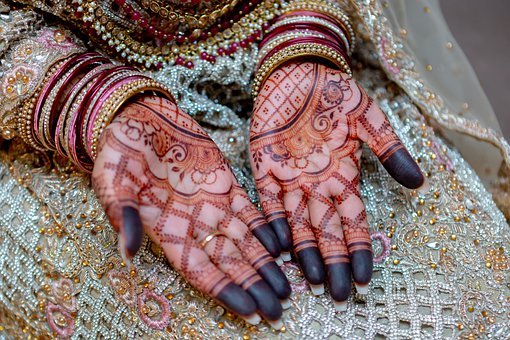 Henna leaves a gorgeous black mark, which is one of many reasons to be delighted.

Whether she is a bride, bridesmaid, or a simple woman, every woman enjoys flaunting gorgeous mehndi. Women are always waiting for an opportunity to apply mehndi designs, such as a festival, an event, a wedding, and so on. Mehndi is like the second love of every woman after diamonds.

If I’m not mistaken, it’s not simply mehndi that drives females insane. women are equally picky about which mehndi pattern is ideal for them. However, with everything going on and everyone rushing around, it’s not easy for a female to pick the perfect mehndi design for herself. There are several considerations that a woman would make while selecting the ideal mehndi design. There’s something for every female, from classic bridal mehndi designs to bespoke love tale henna to tattoo style mehndi.

There are lots of options for her, when it comes to finding inspiration for mehndi patterns which may go on and on. There are several alternatives from which to pick, and these options might be confusing. In addition, it might affect a women’s mood. Wait! We can’t let that happen with her and that’s why we have compiled a list of top 15 mehndi designs which one can go for while applying mehndi.

So, just forget all the confusion and have a look at these amazing mehndi designs.

These hand mehndi designs can assist you in resolving a women’s struggle over which design is ideal to wear for a specific event. 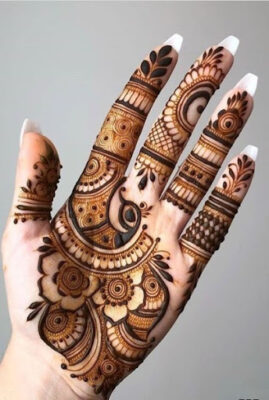 In spite of the fact that there is a wide selection of mehndi patterns to pick from, the peacock mehndi design is by far the most popular and sought after. The beauty of the peacock motif has stood the test of time, and every women enjoys the way it looks when it is applied on a women’s hand. Whether you choose to get a full hand mehndi or just a little Arabic pattern, peacock motifs may simply be blended into your hands. 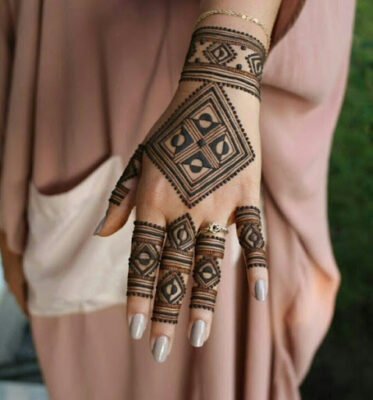 One of the most underrated yet visually appealing types of mehndi patterns is the geometric mehndi design. If a lady is willing to try out a variety of different styles and daring designs, then this is the one she can try. This particular mehendi pattern is sure to attract people’s attention and cause them to glance in your direction more than once. The versatility of this unique mehendi pattern makes it ideal for use at both traditional and contemporary gatherings. The fact that its design does not belong to either the contemporary or the classic look makes it all the more remarkable. 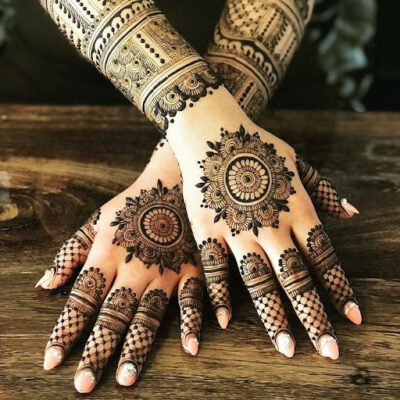 Mehendi designs in the shape of mandalas are well known to every female. They have always been drawn on the hands, and they are an essential component of the designs used for traditional mehndi. These beautiful designs may be made using rings or circles, and they are a treat for the eyes. These come in a wide variety of mandala designs, from the most simple to the most complex, and have the ability to make mehndi-covered hands seem more vibrant than any other design. You may find a wide variety of stunning bridal mehndi designs and mehndi artists that are able to help you on both our website Peppynite and many social media platforms.

One of the most common and often used motifs in mehndi patterns for the hands is the lotus flower. Lotus patterns not only provide an excellent and heavenly quality to the mehndi design, but they also appear stunningly beautiful. This makes them an excellent choice for usage in mehndi. The ever-so-classic lotus patterns are the ideal combination of traditionalism and quirkiness, and they can be used in a variety of ways throughout the design. They may either serve as the primary focus or as an accent to the overall pattern. It always depends upon the women that how they want them to be. 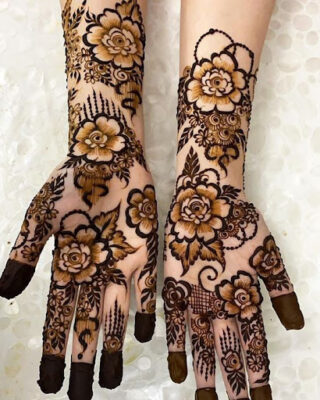 When you think of love and passion, roses are the first thing that come to mind, then the rose mehndi design is the perfect choice. Because of the romantic emotions, it is unlikely that they will ever go out of style. They provide a women mehndi rhythm, which, in turn, enhances the aesthetic value of the design. The delicate and elegant style of mehndi is shown in this particular pattern. From large roses as the central focus of  design to little roses as the finishing touch, roses will never fail to provide the joy that a women  deserves. 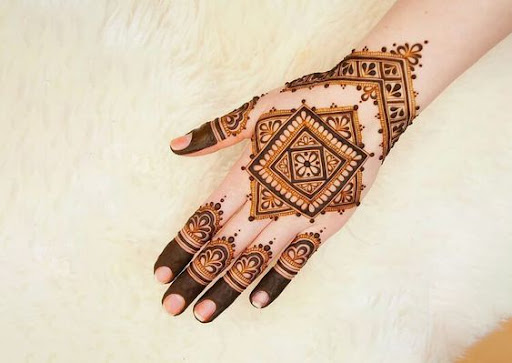 The majority of those who are passionate about mehndi adore this Moroccan-inspired mehndi design. The reason for this is because the design consists of basic geometric forms that have a modern feel. So, women’s What are you waiting for? Just keep trying something different   with the Moroccan mehndi designs. 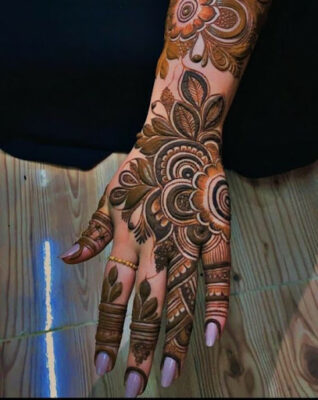 A bold Mehndi design may be combined with every other design in order to elaborate the elegance of design. The major goal of this design is to draw attention to the outlines of patterns on the hands. It gives the whole design a dark classic look which can go with both aspects traditional and modern. There are many different alternatives to choose from when it comes to bold mehndi designs. This is because the level of boldness of the patterns may vary, as per the women want or choice. 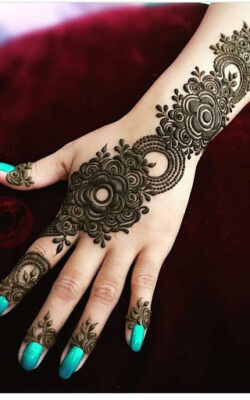 The art of Arabic mehndi may be traced back to Persia, but in recent years it has acquired popularity all over. An Arabic mehndi design may be identified by its free-flowing patterns and its use of traditional mehndi components such as paisleys, flowers, and leaves in a contemporary manner. It combines the finest features of both simple and complex patterns by incorporating them into its design. You may choose a design for Arabic mehndi that is appropriate for every event or for every day of the year. 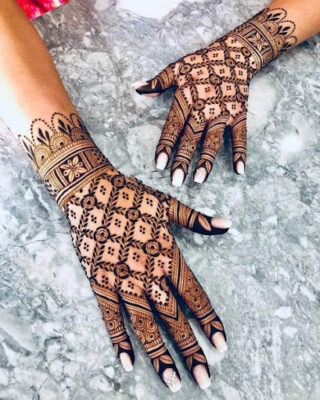 A symmetrical criss-cross line pattern is the foundation of a jaal mehendi design. This pattern can be embellished with flowers, leaves, ghewars, elaborate motifs, and so on. This mehndi pattern is very photogenic, which is still another reason why it is so appealing. There is no question that young women like this particular mehndi design. A  women may even include her beliefs and the customs she was up with into this mehndi design for herself. This mehndi pattern is versatile and may be combined with any other design she likes without any hassle. 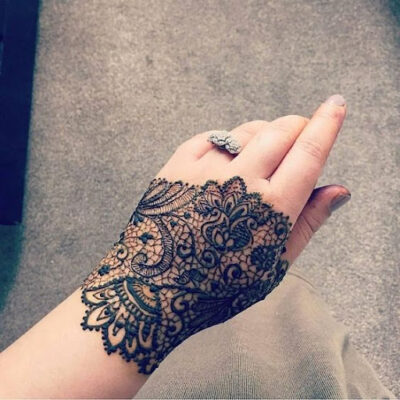 Lace mehndi design can be used to produce a real-life lace-like look on your hand. This fashionable lace illusion mehndi design conveys a luxurious western vibe. To create this pattern, most artists use genuine lace as a stencil. Others are inspired by lace patterns and use them to showcase their abilities by creating elaborate and delicate patterns. Traditional Indian designs such as temple shapes, paisleys, and bumps may also be used. It makes a lovely  lace mehndi design that is appropriate for every women. 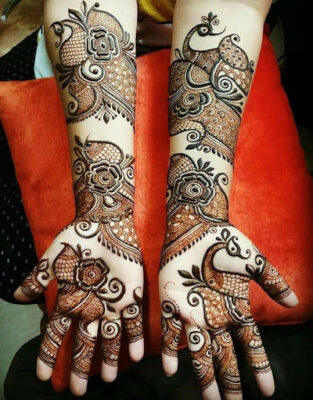 Sectional mehndi designs are sometimes also called as bangle or band mehndi designs. These particular mehndi designs are often segmented into a variety of pieces and may span the whole hand. This pattern lends your hand an elegant and stylish appearance, which works to enhance a woman’s natural charm. 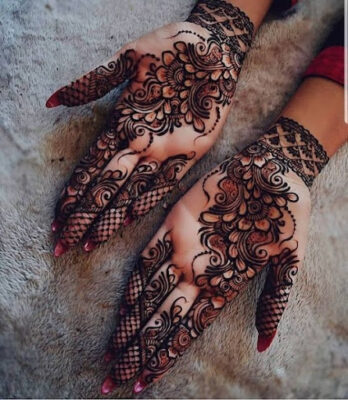 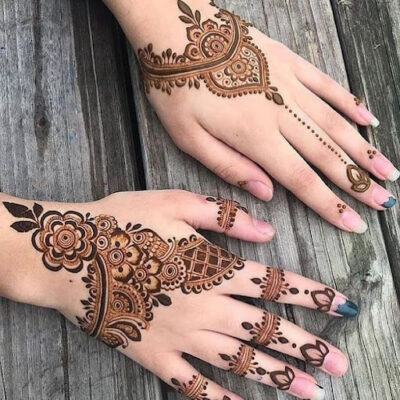 Ring henna designs are quite stunning to look at and give the palm an appearance that cannot be recreated. The design of this pattern begins on the palm and extends all the way up the fingers in beautiful manner, creating an extraordinary appearance. This kind of mehndi creates an appearance that is classic and is appropriate for a wide variety of occasions. A simple ring mehndi design may be applied whenever you want to brighten up your day. You don’t have to wait for a wedding or any other auspicious occasion to put it on like you do with traditional mehndi patterns. This is another nice feature about ring mehndi designs. 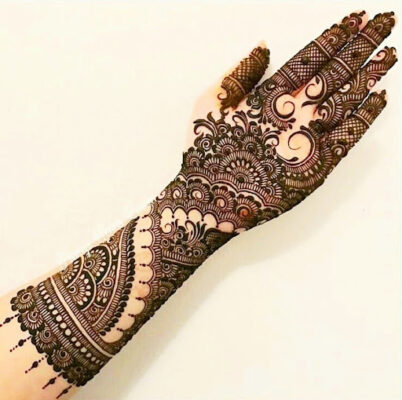 This is a heavy but gorgeous full-hand mehndi pattern that was done specifically for wedding use. The delicate pattern of traditional mehndi is recreated with a contemporary twist. This mehndi design is quite appealing since it has floral patterns, thick and thin lines, a few swirls, and a little bit of shading. This stunning design is a fantastic source of inspiration for the backs of your hands if you are searching for a wedding mehndi design . The pattern is elaborated, and it includes all of the typical elements seen in Indian mehndi designs. 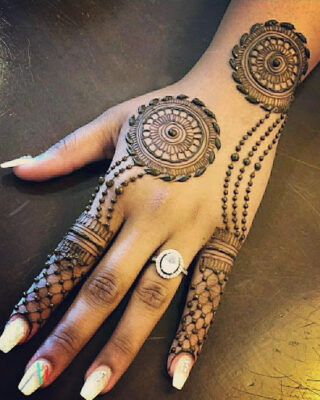 Last but not the least is the hanging mehndi designs. This traditional mehndi design has an intricate pattern in the middle of the hand or anywhere else on the hand, and a more straightforward pattern on the fingers. The method through which this pattern is executed is where the word hanging comes from. A jhumka or birds on your palm and a vine line pattern on your fingers is all it takes. This style is especially popular among college-aged women and is also appropriate for less formal events such as karwa chauth.