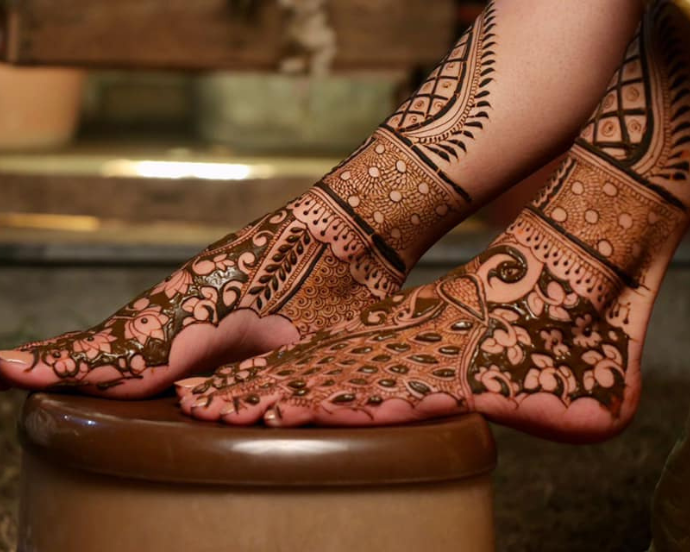 The big day is here and we bought to you some of these Top 15 Simple Mehndi Design Ideas. That brides can try make your wedding suitable with these Simple Mehndi Design Ideas. Mehndi is an important part of many wedding traditions, and these simple designs are sure to add the perfect touch of elegance and cultural significance to your special day. Remember to take your time and be gentle as you apply the mehndi, and don’t be afraid to try out different patterns and designs until you find something you love.

If you are about to get hitched and looking for a professional mehndi artists with that minimalist mehndi then you are at the right place. We are about to share with you some beautiful, simple mehndi designs to compliment your mehndi with your wedding attire. Look no further! Here are 15 easy yet elegant ideas to choose from: 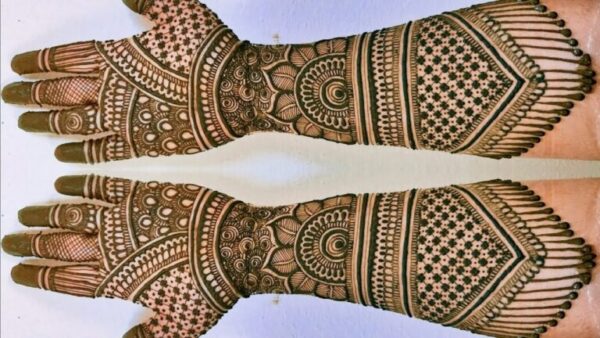 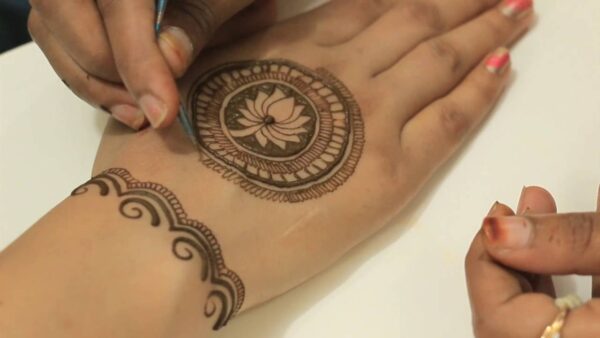 A unique mehndi design with lotus describes your love for flowers. And we love that our brides are so much into these designs. Lotus mehndi design signifies beauty in every bride’s hands, but it’s not that easy for anybody to apply to it might look easy. So, if you are about to be the bride of this season you would need the best bridal mehndi artist for it because only they know how to make the best lotus on your hands. When it is created into a mehndi design, these symbols can add a touch of cultural significance and personal meaning to the design.

The design itself may be intricate and detailed, or it may be more simple and understated, depending on the preferences of the wearer. Unique mehndi designs with bell and lotus elements can be worn by anyone, regardless of their cultural background, and can be a meaningful way to celebrate a special occasion such as a wedding or any of its festivities. 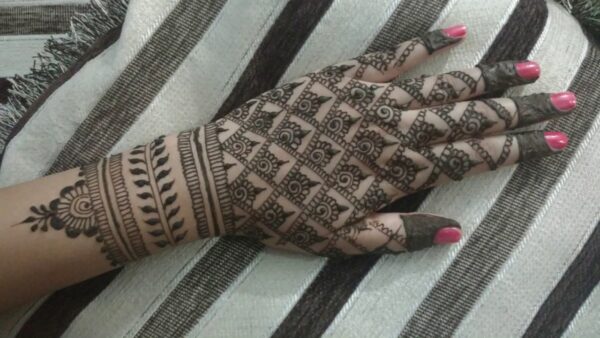 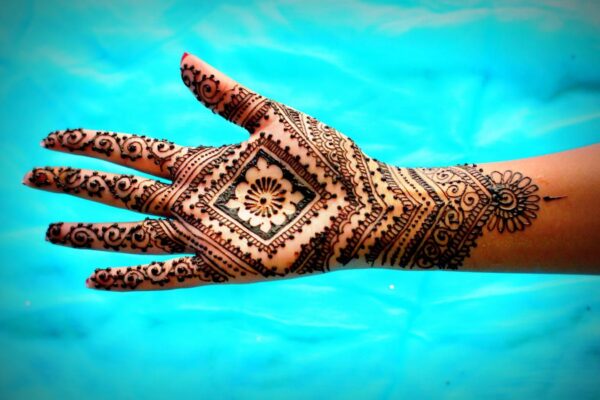 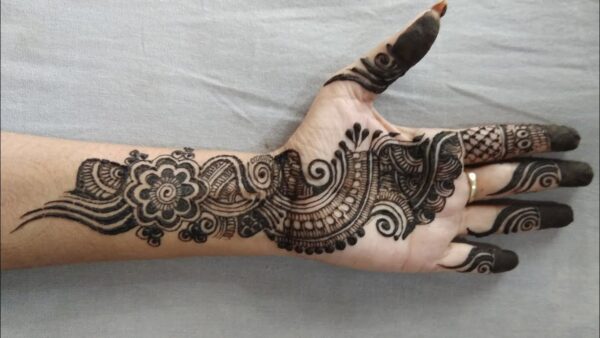 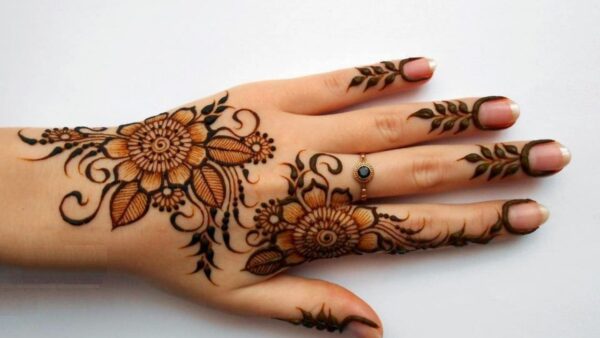 Mehndi design is unique yet referred to as the simplest mehndi design. This mehndi design is very much used by the brides of Delhi. So, if you are in Delhi, you can book yourself a party mehndi artist that is perfect there and can have the best minimalistic mehndi of your time on your hands. This flowerful mehndi is known for being a super beautiful mehndi design that is loved by brides these days. Do not think too much because this design is for you. Undoubtedly go for it and book for yourself the best bridal mehndi artist. 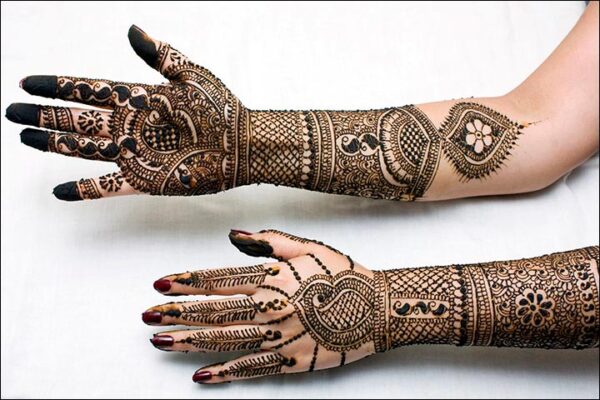 Mehndi design with figurines detailed images or figures into the design. This mehndi design is usually famous in Rajasthan. A blend of mehndi designs that is famous for regional people but is now getting trendy in 2022.  So, if you are getting married in 2023 then this is the design for you. Mehndi designs with figurines may be applied to any part of the body, but are most commonly found on the hands and feet. These designs are often intricate and detailed and may be created by a professional mehndi artist or by using stencils. So, don’t think twice about this mehndi design. 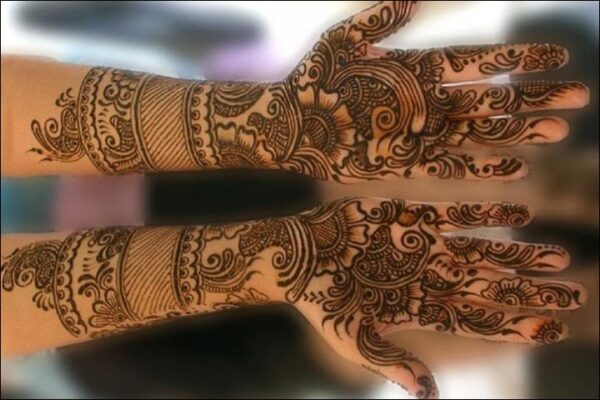 Rajasthani pattern looks thick and attractive. This design is artistic and has very heavy patterns with floral and other elements you can try this pattern for your family ceremonies like a wedding or engagements. A modern mehndi with its modern design and the best part about this mehndi is that it goes with every outfit, whether you are a bride or bridesmaid. You will not only get this mehndi design everywhere but also from the Best Mehndi Artists in India that are super talented and knows how to make your hands beautiful and pretty. So, brides don’t think too much about it because this season goes with amazing mehndi and this would be the best for you. 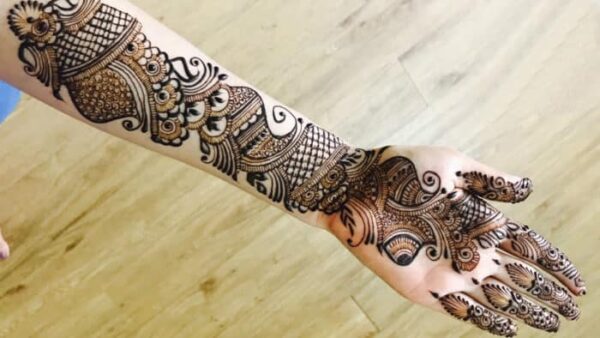 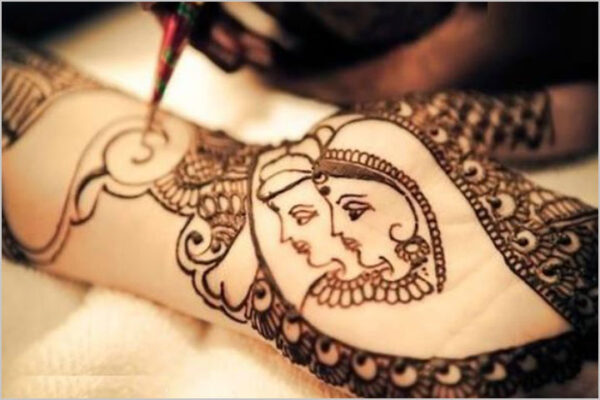 These days this mehndi is very trendy. Brides are usually in love with this because they want their mehndi to be unique and having such figures makes them look prettiest. Mehndi with bride and groom figures is often worn by brides and grooms as part of their wedding attire, and can be a meaningful way to symbolize the bond between the couple. These designs may be created by an Indian professional mehndi artist. So, if you are getting married in 2023 this is not going off the hook and is perfect for your wedding season. 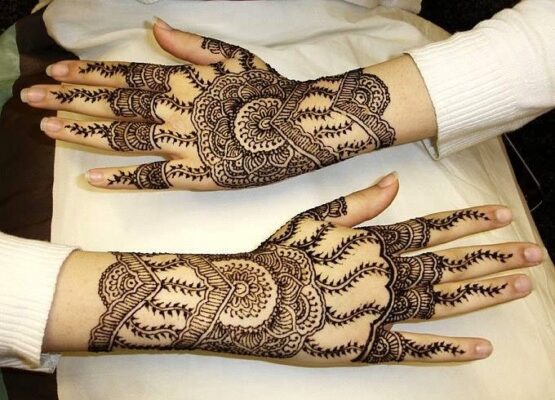 Mandalas for hands and feet 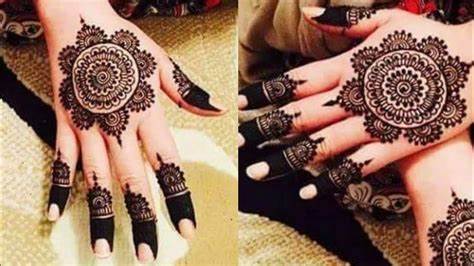 Mandalas for hands and feet feature net-like patterns, known as jaal or circle designs. These mehndi designs may be simple and understated and can be used for weddings you want to be simple or can be used for a party which can be applied only by a party mehndi artist. Because these designs constitute beautiful hands and feets brides often go for them.  These designs are often worn by women as part of traditional wedding attire in India and the Middle East and are so popular for other special occasions such as festivals and celebrations, so if you think about it go for it. Mostly it went popular after Alia-Bhatt used it on her hands after wedding, and this became a major trend for girls in 2022. 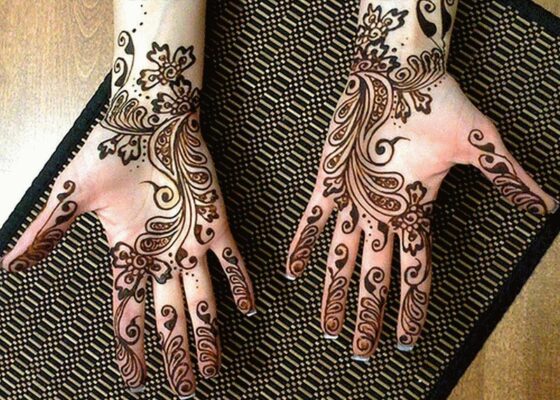 Modern Arabic style mehndi designs are a type of henna design that combines traditional Arabic mehndi designs with more modern, contemporary styles and trends. These designs may feature elements such as unique shapes, flowers, petals, lines, and more, it also goes as traditional Arabic mehndi designs. These designs are made only and only by professional mehndi artist that makes everything go beautiful because only they can make it right. So, for that, you will need a perfectionist to make your wedding day bloom with your hands.

Mehndi Design for Back 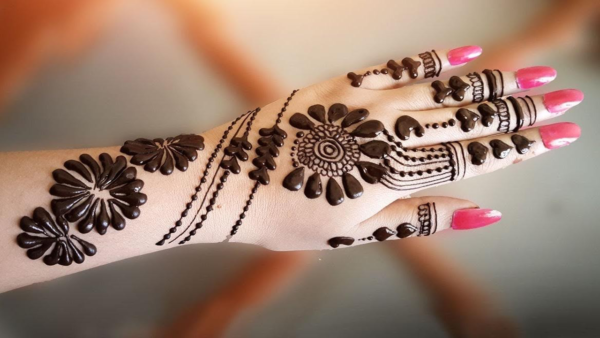 These days mehndi is trendy and that’s why brides are performing it on any part of the body. So, some brides these days cover their back and want to have beautiful designs. If you are the bride of the season and you are looking for it, mehndi artists can help you look your best during the wedding season. Aspiring designs that make you look your best and unique. Do, if you are going for the backless dress so this could be perfected mehndi design for you. Go no hassle to skip it because this is in our top 15 list of simple mehndi designs. Think not twice because it’s gonna be your best thing this wedding season. 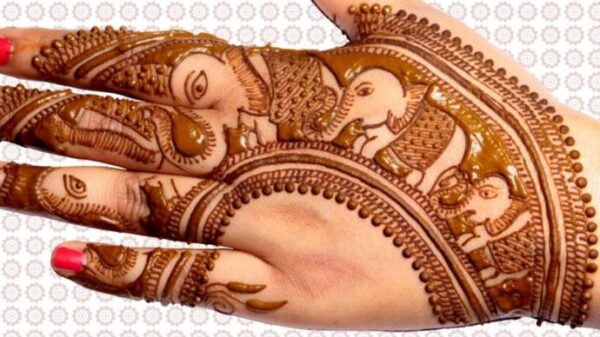 Elephant Motifs Mehndi is the most elegant and unique mehndi design as it is the kind of mehndi that is super traditional mehndi. This mehndi is super cultural and traditional because it is used in many these designs may be simple and understated, or they may be more intricate and detailed, depending on the preferences of the bridesmaids and the overall theme of the wedding. It comes under bridal mehndi through bridal mehndi artists. In India, mehndi is the most precious thing in India, and this design is so unique and attractive it usually makes the bride look their best. Surely this gonna be your best mehndi if you are thinking about it undoubtedly because it is the design for you.

Hope that this blog has made your way out toward these 15 simple mehndi design ideas. Make sure you get styles with inspiring mehndi designs this season and nail yourself perfectly. Remember to take your time and be gentle as you apply the mehndi, and don’t be afraid to try out different patterns and designs until you find something you like.

Peppynite is one stop destination for top wedding vendors like bridal makeup artists, wedding photographers, mehndi artists and more, so don’t stop yourself until you scroll down to our website www.peppynite.com and book ultimate services for your wedding in the upcoming wedding season 2023!!!! We hope that this blog has helped you relentlessly in taking ideas for your bridal mehndi and that you can say it magnificently this wedding season with your loved ones.

Please don’t hesitate in confronting us with any queries or questions related to Mehndi Desigsners in India. Don’t forget that Peppynite is working for you, to make your wedding a successful yet memorable one. Book from us today and also read related blogs here: