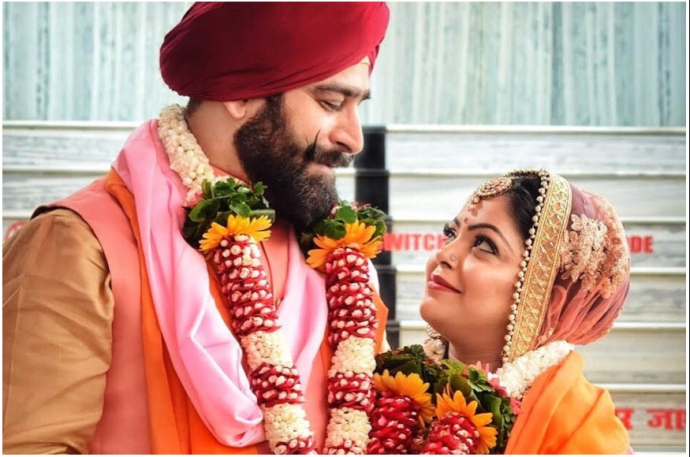 As the wedding season in the country passes the December mid-point, another celebrity joins the bandwagon. And this time, it’s the actress from ‘Yeh Rishta Kya Kehlata Hai’- Divya Bhatnagar. The popular actress who has gained recognition for her role in the aforementioned show and ‘Udaan’ married her long-time boyfriend Gagan aka Gabru.

The newly-married couple has been in courtship for the last five years and exchanged rings in 2015. But they were unable to tie the knot several times before because of many unforeseen reasons. And finally, they were able to get married yesterday in a small and intimate ceremony at a Gurudwara in Mumbai. The wedding was attended by only close friends of the two.

The actress made the news official on her Instagram profile with a picture of the two in their wedding attire, captioned: “WE MADE IT”

Divya was excited and happy to share the news and said, “We wanted a simple wedding without any taam-jhaam and so, we only invited a handful of close friends on our big day. We performed all rituals, including Mehendi, Haldi, and the Chooda ceremony.”

The actress further added, “Everything happened suddenly. We have been in a relationship for five years and have weathered many storms, but we were certain that we wanted to be together.”

Pour Wine 🍷 His last name is Mine ❤️

However, Families of both celebrities don’t attend the wedding. Talking about the matter, Divya said, “I was extremely emotional, as neither of our families could be present at our wedding. I had always dreamed of a big fat Shaadi, but we had to opt for a simple ceremony, as our families were not in approval of our marriage.”

Divya’s husband, Gagan, is also in the entertainment industry and works for productions houses that make reality shows. Along with that, he’s also into artiste management professionally.

We wish the lovely pair a heartfelt congratulations and happy married life ahead.