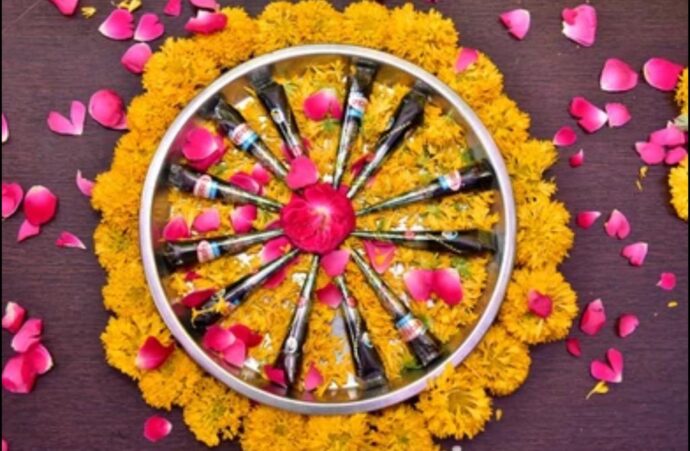 Henna or mehndi is an integral part of all weddings in India. Whether they are intimate ceremonies or big fat weddings, ornate Mehndi Design adorn the bride and sometimes groom too.

The mehndi ceremony is a major event in the wedding festivities that has a lot of cultural importance. It is an important ritual in the days leading up to the wedding where the bride’s mother, friends and other female relatives get together to apply mehndi and share wishes for a happy marriage, amidst fun-filled singing and dancing.

Additionally, it is believed that the darker color of the mehndi stain, the more the love between the couple and also between daughter-in-law and mother-in-law.

For this reason, the Best Mehndi Artists in India have their own closely guarded recipes for henna pastes that leave dark stains. Some add sugar to it, and other mehndi artists smoke applied henna with cloves to make the stain rich and dark.

The bride must look prettier than anyone else. So, the most intricate henna patterns are applied to her limbs to set her apart from everyone else in the bridal party. Leading bridal mehndi artists and the Best Party Mehndi Artists favor delicate lace patterns, nature-inspired designs, depictions of animals, Hindu gods and goddesses, and symbolic designs that are significant because of the spiritual aspect of attracting blessings, luck, joy, and love. Some brides also like to have their beloved’s name – which is an interesting game when the spouse tries to locate the name.

While mehndi artists today are experimenting a lot when it comes to mehndi designs, nature-inspired motifs remain the most popular. This is for good reason too. Whether it is Arabic or Rajasthani mehndi, flower patterns, vines and leafy clusters look beautiful with rich bridal outfits. 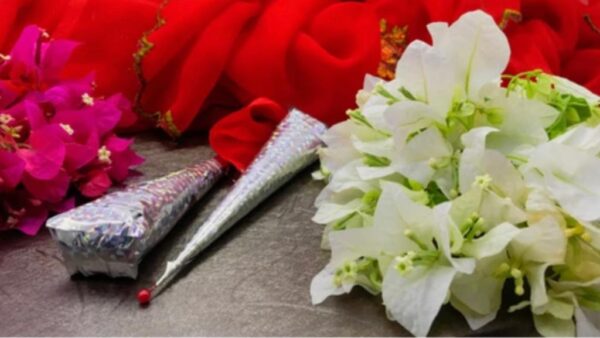 Arabic mehndi can be identified with thicker and border outer designs with lighter shading inside. This type of mehndi is really popular amongst friends of the bride, and depending on the intricacy, can also be used to adorn the hands and feet of the bride. Arabic mehndi mostly uses free-flowing diagonal trails – dominated by floral patterns, paisley motifs, leafy clusters, vines and delicate tendrils. These floral patterns can also have scalloped designs on the fingertips that make fingers appear slender and delicate. Paired with rich gold jewelry and glitter nails, it makes for a swoon-worthy sight.

The pattern involves a high degree of attention to every detail. Paisleys are distinctive and intricate curved mango-shaped figures that are inspired by the shape of the raw mango. Traditionally, this motif is significant because it is supposed to be a blessing for fertility and prosperity.

There is something about the soft and rounded paisley that looks so good on every hand and leg. This design is a safe bet for brides that are confused about the theme of their bridal mehndi design. The best part is that the basic shape of the paisley can be adapted to make intricate or even minimal designs. They work very well in Rajasthani mehndi as well as Arabic mehndi.

This is one design in which the bride and groom can be twinning too! The bride can have elaborate extended paisleys for her large mehndi design, while the groom can have just one paisley design on just the palms.

Vine and leaf motifs can be adapted in both traditional as well as non-traditional ways in any bridal henna pattern. These mehndi designs can go 4-5 inches up her ankle and elbows as well.

There is nothing that can go wrong with this paisley mehndi design and it is sure to bring to you all the good luck and best wishes that you need while embarking on this new journey ahead.

Flowers are a staple in wedding henna designs. They represent the beauty of nature, and the bride, as well as new beginnings. Whether it is standalone blooms in the form of lotuses, roses or marigolds, or a cluster of flowers – they look amazingly beautiful. A creative mehndi artist will also be able to match the floral embroidery on your wedding outfit with the henna on your hands and feet. Floral patterns – especially the petals tend to accentuate the natural curves of hands and feet too – thereby making them appear even more delicate. Rose-based mandalas are also rather popular among brides. Lotus flowers are representative of grace, purity and wisdom.

What distinguishes a basic floral mehndi from an extraordinary one is its design and style. A bride that has a distinctive style will want to mix two or more patterns to create something unique and magical for her big day. Floral patterns can combine a lot of elements to create a lacy or bouquet style mehndi design. 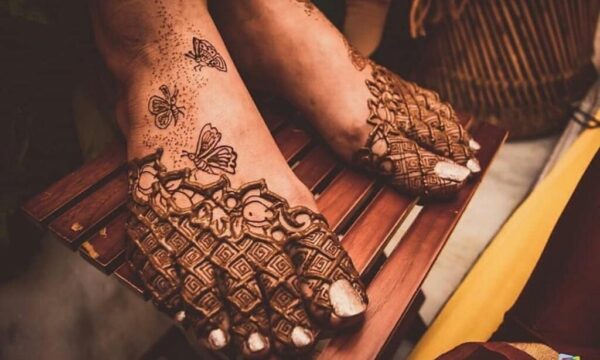 The best mehndi artists of India are the ones that will be able to create something offbeat and unusual in your mehndi. Animal motifs on your mehndi will be a tribute to the animal lover in you. When brides choose to go for animal motifs, it without a doubt becomes the most attractive design to look at.  Not only are these designs attractive, but each animal motif has a specific meaning to it. Animal motifs are really popular in Marwari mehndi patterns.

Elephant motifs are trending in bridal mehndi designs these days. These royal animals denote strength and maturity. One of the most revered Hindu gods – Ganesha – takes the form of an elephant.

Horse designs are not only symbolic of royalty, but also represent strength, beauty and social respect. Butterflies and dragonflies – so common in fusion mehndi designs – are representative of transformation or rebirth, and also new beginnings.

A pair of fish depicted together denotes trust and fidelity.

Birds, because of their significance in Indian culture, and love stories, are also popular motifs for bridal mehndi designs. Each and every bird represents something or the other. Peacocks, for example, represent beauty. Peacock feathers as mehndi designs are supposed to be a blessing for riches.

In Hindu mythology, the peacock is a sacred bird that appears in many scriptures. It is interesting to note that since the peacock hunts snakes, the peacock in a mehndi design is believed to protect from bad spirits and negative vibes.

Bird motifs also signify the link between heaven and earth. On a bride’s hands, they mean how she will be the entire Universe for her life partner.

When you choose a Top Mehndi Artist, you should discuss these ideas and see their previous work before selecting.